Because You Don't Leave Money on the Table: More, "Three Jokers," on the Way 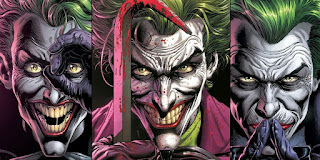 I liked, "Three Jokers," just fine. The first issue had my attention because Fabok is an amazing artist and even though I mused as early as the debut, "...I feel like no answer could truly be satisfying," as to why there are three Jokers and why we should even care, it was still a fun read. The art continued to impress me throughout the three-issue mini-series and the plot was perfectly fine if uninspiring beyond multiple callbacks to classic Batman stories (especially, "the Killing Joke,") to a point where Geoff Johns almost seems cursed to try to out-Moore Alan Moore by taking his stories and making subpar sequels to them--e.g. the competent, "Doomsday Clock," that tried desperately to say something about, "Watchmen," but while being fun, failed at such a statement (it also had amazing art by Gary Frank, so Johns at least knows how to get great collaborators).

I don't really have a review to offer of, "Three Jokers," besides my observation the art was on point and it had some great moments beyond otherwise falling a little flat. Over at The Comics Journal, Joe Mcculloch has a big piece examining this, "Momentism," and says it better than I ever could. That said, "Three Jokers," ends with a shocking(?) reveal that--spoiler alert--Batman has known since a week after he met the Joker who exactly the Joker really is. It's the version with the origin from, "The Killing Joke," that has a wife and son he was led to believe died, but are living quietly in Alaska. As, "Three Jokers," sort-of is and sort-of isn't in any kind of, "Official," continuity this juicy piece of plot could've remained unresolved for some time. 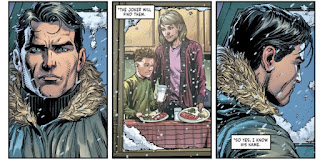 However, "Three Jokers," made--excuse my technical language--a buttload of money, so a one-shot that will build-off of the mini-series is apparently on the way. This one-shot along with others will also address how DC is apparently going to be playing a little more fast-and-loose with continuity in the future, so DC can have its cake and eat it too about if any of these Joker tales, "Count," in regards to the Joker's family, the comic killing off an elderly Joe Chill (the man who killed young Bruce Wayne's parents in the alley) and other plot elements.

All of this serves as some proof how if you're a big corporation you never leave money on the table. I'm not sure how good a potential, "Three Jokers," follow-up one-shot will be, but as long as Fabok is on the art it'll at least be good-looking. Also, if the one-shot that is kind of a fourth issue to the mini-series isn't called, "The FOURTH Joker," that's just a huge missed opportunity for some fun symmetry.