They Found a Weird Monolith in the Deserts of Utah 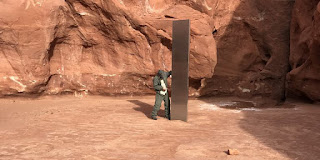 A weird metal monolith was found in the middle of the deserts of Utah. I understand this is probably a unique piece of art, someone making a statement, that sort of thing. I know some people want to say it is aliens, but I doubt that. However, is 2020 really the year to be plopping down mysterious sleek metallic structures inspired by, "2001: A Space Odyssey," out of all years? 2020 has been an absolute shitshow of COVID-19, murder hornets, a war nearly starting being America and Iran, a political election that Trump refused to concede, the government releasing videos of UFOs when the former singer of Blink-182 forced their hand, people getting mystery seeds in the mail, and strangeness upon strangeness in the World. I don't think this is the appropriate time for a mysterious monolith. Maybe in 2021, but not now.

That said, the monolith is kind of cool-looking and it does remind me how that movie it is likely indirectly related to was pretty dope. That scene with HAL admitting that despite a computer it was scared to be turned off (even if it was homicidal) was weirdly touching and scary. Anyway, this isn't the year!