"The Other History of the DC Universe," is the Best thing DC has Released in Years 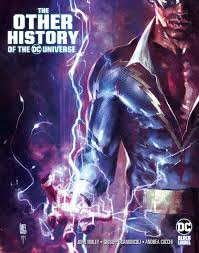 If you love comics and don't mind a slightly unorthodox format to them, you really ought to read, "The Other History of the DC Universe." Written by Oscar-award winning director John Ridley (who has written some other stellar comics too), it presents a prose-ish style of storytelling with illustrative additions that isn't quite a prose book with some pictures or a straight-up comic. This is also out of continuity as it dramatically ages our heroes in a manner the usual sliding-timeline of mainstream comics doesn't work with. The comic follows a young-to-older Jefferson Pierce from 1972 through 1995 as he realizes he has powers and uses them to fight crime as Black Lighting, all the while observing the, "Big name," heroes who happen to all be white (or a green alien) getting acclaim while his Black self receives scorn. It's really good writing and the illustrations by Giuseppe Camuncoli are gorgeous too. Seriously, this is the best thing DC has released in years.

"The Other History of the DC Universe," is going to be a series that sets out to examine the DC comic universe from the perspective of minority characters. It provides a unique take on people seeing these beings of amazing power in their World, but few of these people look like them or seem to care about everyday struggles. As Pierce remarks when Superman first confronts him, it seems the League is happy to fight interdimensional threats to reality, but cares little for stopping drug dealers or helping repair the deteriorating buildings of the inner-city. 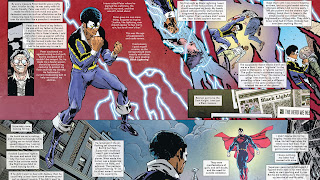 Pierce is the protagonist of this comic, with his journal-style writings, but he has many flaws of his own. He lies to his wife about being a hero, and admits it is a bit of an addiction beating-up those who harm his city, almost as if he needed a way to target his rage lest someone innocent get hurt, and thankfully there were plenty of outlets. Pierce is all too human despite having powers, and he learns as the comic goes on many of the supposedly, "Perfect," beings people admire are flawed too.

"The Other History of the DC Universe," is not a, "Black," comic as I saw some remark online when they heard about it. It is a comic for everyone that happens to provide an interesting take on DC's heroes by giving a voice to often-overlooked characters. I loved what I read in this issue and eagerly await the upcoming ones.