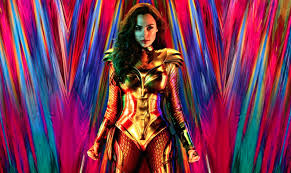 After numerous delays, it seems Warner Brothers has decided, "No more!" and shall be releasing, "Wonder Woman: 1984," on HBO MAX this December 25th/Christmas. Gal Gadot shall be gracing our televisions before the year is done! There are some caveats with that, however. It'll only be streaming America (other countries have a theatrical release on December 16th) and only be on HBO MAX for a month, apparently. There have been constant rumors about big movies being released on streaming services to draw more subscribers and recoup some costs, but now it is actually happening with this, Pixar's flick, "Soul," and possibly in the near future the latest constantly-delayed James Bond movie (no word yet on Marvel's plans for, "Black Widow," but one wonders).

The big question in all this is if these blockbusters coming to streaming services is merely a temporary side-effect of the pandemic or signifies a big change coming in the near future to how movies are released. Could we see more simultaneous streaming and theatrical debuts in the coming years, or much shorter runs in theaters before things start to stream? Many questions are being raised, but we can't really expect answers until COVID-19 is (I pray soon) eradicated. Whatever the case, tune in to the latest Wonder Woman flick this Christmas if you've got HBO MAX, or plan to get it soon!