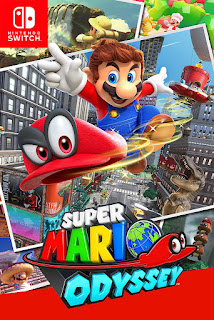 It came out some time ago, but I finally had the chance to play, "Super Mario Odyssey," for the Nintendo Switch. I didn't play it sooner because I saw I could request it from the library and just needed to be patient while other holds got copies for a couple weeks. Then it was my turn and I got to play the game without having to drop a stack of bills on a copy. I've liked the solid chunk of the game I played, but found myself getting a little bored of the formula as it appeared.

The, "Formula," in this Mario game is also the hook--Mario can throw a hat and possess other characters this way. You can take-over the bodies of assorted creatures and robots--and need to in order to solve many puzzles. As you travel to various zones you'll find an assortment of interesting things to possess in-between the usual jumping and running about. Over time, however, the routine becomes clear. 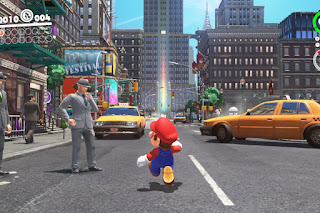 You go someplace new, find some creatures to possess to get past obstacles or solve a puzzle, and you're on to the next World. It is fun, but after the big Metro level (New Donk City) I was getting way too used to this methodology. Occasionally something wonky and neat will happen like you suddenly going 2D and looking like an old-school Mario, and the graphics are very pretty. Still, I am glad I was able to check the game out from the library as opposed to spending my monies on it as while I'm having some fun, I feel myself getting a little tired of it and I probably won't finish the game. It is a fun little diversion for a bit, however.