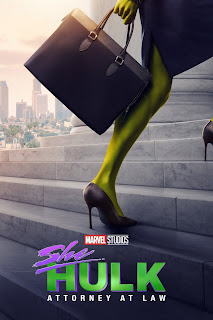 First of all, thank God this show got pretty much all the background/set-up/etc. established and done in the first episode. As much as I enjoyed the Disney+ production of, "Moon Knight," it took forever for the show to properly explain the overall premise and--you know--give us Moon Knight. "She-Hulk," explains everything we need to know in the first episode, and I appreciate that. Jennifer Walters is Bruce Banner's cousin. Through an accident she becomes She-Hulk, she goes back to her job as a lawyer and is a combination crime-fighter and prosecutor. Bam, there you go. We get a chunk of jokes, a good fight scene, and fun is had.

No insane World-ending stakes as every Marvel production acts like it has to have lately, just some good character moments (Tatiana Maslany is fantastic as Jennifer Walters/She-Hulk), a bit of explosive action, and as I said, it is fun. I'm all for a fun legal drama-comedy (or dramedy, as the kids say) that throws in some super-heroics while examining various wild and wacky Marvel characters (as previews have indicated we should be seeing). I know some people online complained it was campy and there are the usual haters who are mad a female is the star of a show (seriously, they're enraged about a lady leading a show and complaining that somehow makes it, "Woke," or, "Feiminist," in a bad way), but I liked this debut episode a lot. I will be tuning in for more!