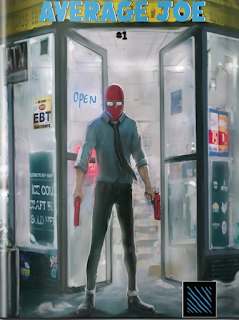 I always enjoy reading and reviewing smaller-press/indie comics. I was browsing Offerup, of all places, when I saw Thomas Ryan, the creator/writer of a comic called, "Average Joe," was selling some extra copies of the series he had leftover from Kickstarter campaigns. I purchased the three issues that had come out so far to be shipped to me, they arrived shortly after, and I've given them a read. I quite liked what I've seen!

The story reminds me a bit of, "Top 10," mixed with a less outright-visceral version of, "The Boys." It is a World where there are tons of superheroes and even if not everyone is superpowered many people are. This has led to an oversaturation of good guys and very little crime for them to fight. Hence, it is important for anyone who is a hero to heavily promote themselves in the hopes of getting any semibalance of fame, endorsements, etc. This leads us to the protragonist, Max Buchanan, a relatively ordinary guy who attempts to be a big of a vigilante himself after some tragic events make him lose faith in the capes, as it were. 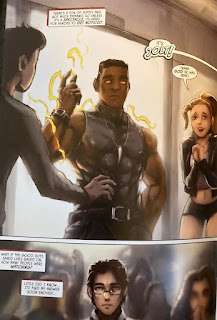 The art by Thien Uncage is great. The heroic characters have an intentionally sterotypical clean-cut look whilst villains are quite creepy and Max is extremely unassuming, as one would think he is until he starts engaging in his own superheroics. If I were to have a complaint about these three issues it would be that things don't really get going until the first third of the second issue in terms of Max Buchanan becoming the, "Average Joe." I understand the importance of developing a World and its characters before too much happens plot-wise, however, so I'm not especially bothered by the slow-burn style as once the action begins the comic is quite busy--especially in a fight-filled third issue.

"Average Joe," is a fun read with an interesting mixture of concepts. You can find issues for sale at the website of the publisher, Vivid Panel. I'd encourage you to give them a read if you dig smaller publishers the same way I do!