The First Two Issues of, "Aquaman: Andromeda," Are an Eerie Delight 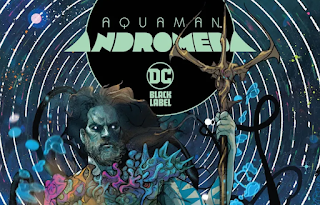 "Aquaman: Andromeda," is a Black Label book from DC written by Ram V with art by Christian Ward. It is one of those snazzy magazine-sized comics DC sometimes does with their Black Label and as it is geared towards older readers has some F-bombs. The Black Label is what emerged from the remnants of Vertigo and while I don't read too much of the regular DC books I've really been liking the Black Label output. This, "Aquaman," comic with its mixture of a sci-fi and horror vibe has hooked my attention much like other Black Label titles.

The comic doesn't focus on Aquaman, instead having him serve more as an ominous force that exists in the Ocean, with our main characters being a crew on an experimental ship sent to explore a possible alien craft that has landed in the Ocean from outer space. Black Manta has been hired to inspect the craft as well and Aquaman clearly has an interest too. This results in a whole lot of folks converging in the second issue upon the mysterious vessel and a lot of things going horribly wrong in a most creepy manner. 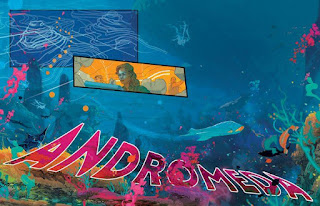 Ram V fills the comic with a sense of dread, emphasizing how isolating and otherworldly the ocean can feel. Christian Ward's art is perfect too, portraying a cold and mysterious underwater landscape. Then in issue two, Ward gives the strange alien ship a bright and colorful yet menacing vibe. It's a fantastic mini-series so far and I can't wait to see where it goes as the ocean and what it contains only get more dangerous.