Another Batman Comic? This Time With Marc Silvestri Involved, Though? Fine, I'm Interested... 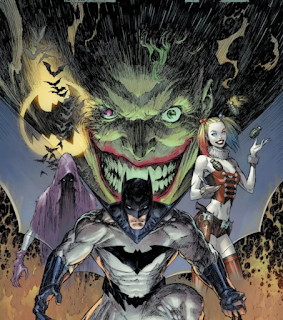 DC puts out a ton of Batman-related comics. Whether it is Batman himself, his allies, his villains, or something that is somehow related to Batman, it makes up a lot of their line. DC also has been putting out a number of snazzy Black Label comics...many of which have admittedly featured Batman. You would think I'd be tired of Black Lable comics featuring Batman or Batman comics in general, and I kind of am! However, when I read that Marc Silvestri is doing a Batman comic, I do actually get a bit intrigured.

Marc Silvestri will be writing and drawing, "Batman/The Joker: The Deadly Duo." It shall be a seven-issue series out of the regular DC continuity and you honestly had me at Silvestri drawing it. I know his art is a bit of an acquired taste, but I've always dug it. Ever since he helped found Image in 1992 the only DC work he's done is a short story in the, "Batman: Black and White," anthology back in 1996, so it has been a while since Silvestri has graced DC with his presence. The series will involve Batman and the Joker teaming up to help save Commissioner Gordon and Harley Quinn from some mysterious entity that has kidnapped them. As long as it looks gorgeous I'm eager to read it.

Posted by David Charles Bitterbaum at 11:51 AM