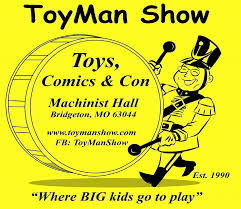 The last ToyMan Show of the Summer (the next one will be in October) was great fun--as is to be expected! I saw many of my awesome friends and was able to trade for and purchase some goodies. I kicked the show off saying hello to John Chaffee of Bigfoot Comics and Collectibles, he had his usual great stuff for sale! I next said hello to Tim Metzger. I got the entire first, “Kingpin,” mini-series from him for a stellar price!

My good chum Spike of Lost in Space Toys and Collectibles had his usual impressive assortment of toys and collectibles (he’s a hoot too). I chatted with Dustin and Tammy for a bit as well and picked up a copy of the 23rd issue of, “Conan the Barbarian,” from them. This issue features the first appearance of Red Sonja inside! Give it a look: 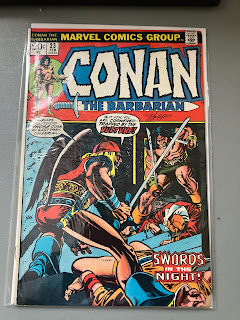 As I continued exploring the downstairs area of Toyman I was able to chat with Tom from Alliance Comics, Toys, and Games. We talked about a variety of stuff and then I ran into Larry of Bug’s Comics. I also greeted Vince of VK Toys and admired some lovely new stuff he had, including a couple of old precode horror comics in slabs. There were tons of other vendors I didn't know as much, and I loved looking at all the toys, Funko Pops, Legos, movies, comics, and all the other items ToyMan is always packed to the gills with!

I proceeded upstairs after a bit and saw my great friend Jessica Mathews! She spoke with me about all the projects she’s been working on and how busy life has been! I also browsed some more vendors upstairs and got to chat with the always-awesome Lindsay Hornsby of Mega Giganto! She had a variety of her comics and crafted items for sale. I couldn’t help but buy a really cute pin. Here it is: 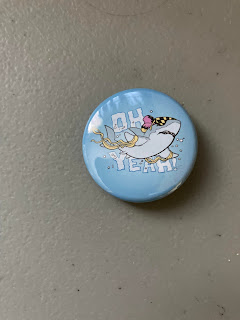 This ToyMan show was a superb way to close out the month of August! Anytime I visit the show I see so many cool items for sale in basically any fandom you can think of. If you haven’t been to a Toyman show I would encourage you to attend the next one (or any future show that you can)! I know I’m pumped for the October 2nd one! It’ll be the same place as usual, 12365 St. Charles Rock Rd, Bridgeton, MO, 63044. It will run from 9AM-3PM with early bird entry at 8AM. I hope to see you all there in a bit over a month!