The Third Issue of, "Clodagh," is Packed With Action 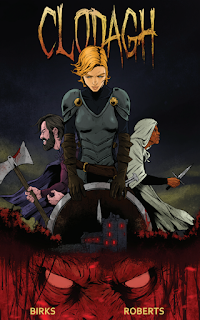 I enjoyed the horror vibe of the earlier issues of, "Clodagh," thanks to publisher Blue Fox letting me read them around the Kickstarter for the second issue. Now, the third issue will have a campaign in the future and I had a chance to read it in advance. Written by Simon Birks with art by Willi Roberts, this entry continues my enjoyment of the series by being quite action-packed! We see more of the evil witch who stole a child named Aine and her mother, named Clodagh as well as a man named Fillin trying to rescue Aine. Our heroes get closer to saving Aine in this issue after fighting all kinds of terrible creatures recruited by the witch. the battle scenes are gorgeously illustrated by Roberts and have an impressive kineticism.

The third issue of "Clodagh," is a great read and I look forward to when it launches the Kickstarter for this issue so that folks can back it and get a copy in their hands! In the meantime, I'd encourage you to visit the website for Blue Fox so you can follow all publishing news about, "Clodagh," and other great books!