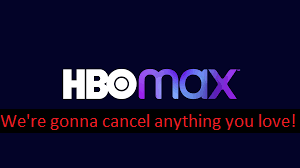 If anyone thought the, "Batgirl," movie and, "Scooby Doo," cartoon being canceled would be it, they were wrong. Warner Brothers Discovery has been cutting a swathe of destruction when it comes to eliminating current and formerly upcoming projects. A good 14% of staff has been laid-off and not even being a big name like Ellen DeGeneres can have your shows avoid getting the ax.

At this point, if you have a project at HBO Max in the pipeline there is an uncomfortably high chance it's going to end up canceled as part of a massive tax write-off. I mean, upwards of 40 shows/movies/etc. are getting purged! It isn't just supposedly more expensive scripted programs, plenty of reality shows are suffering as well. Why any creatives would want to work at Warner Brothers Discovery after this is beyond me. I'd be worried that I would put months of work into something only to have it shelved for eternity. Seriously though, at the rate things are going there won't be much of HBO Max left to merge with Discovey+ next year. More on this mess in the future as it most likely gets worse.