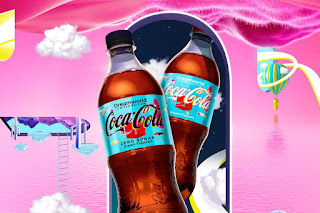 I guess they didn't want to just call it, "Tropical Coke," for some reason? Seriously though, the new Coca-Cola limited time flavor known as, "Dreamworld," is a part of their, "Creations," line and it tastes like someone marinated a bunch of coke in a bucket full of tropical fruits. I ain't mad about it though as this is pretty good.

I previously tried, "Starlight," and found it, "Relatively enjoyable," with its weird mish-mash of flavors. I'd say this, "Dreamworld," flavor is just as good, with the caveat that if you don't like tropical flavors you will most likely despise this. I was cool with it and would drink it again, but it is by no means a replacement for the OG Coke or Cherry Coke.