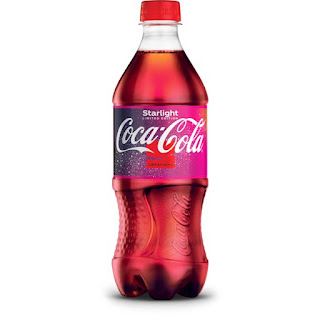 I've tried various flavors of Coke. There are the standby flavors such as Cherry, but weird limited-time ones happen too. Some are pretty good like Cinnamon or Cherry Vanilla. Others are pretty mediocre such as the recent coffee blend. Terrible flavors occur too, such as the Georgia peach and California raspberry flavors which I referred to, as "Disgusting abominations." This brings us to the latest short-period-of-time Coke product, "Starlight." As a part of the new line of drinks that will be called, "Coca Cola Creations," the idea is to not have an exact flavor as to evoke a feeling. "Starlight," is designed to make you feel like you're looking up at the stars by a campfire, observing the vastness of space. It's decent.

If you were to liquefy a bunch of marshmallows, graham crackers, and a tiny bit of chocolate, then mix them with a Coke you'd probably get what, "Starlight," tastes like. At first blush that may sound disgusting, but it actually is relatively enjoyable to drink this mix of Smores and Coke. There is a nice light crispness and everyone agrees it is extremely sweet but disagrees about the exact flavor. I've seen some think it tastes more like cotton candy and others claiming they get a minty raspberry vibe. I stand by my, "Vaguely like smores," assessment, however. It's an enjoyable flavor and makes some curious what other, "Creations," we'll be getting, so mission accomplished to Coca-Cola for starting with a solid drink to represent this new mini-franchise.