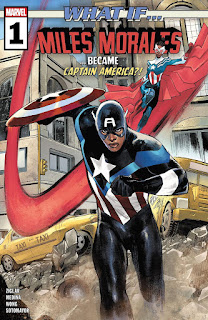 I (almost) always love a good alternate reality tale. DC has done them with titles such as, "Elseworlds," or, "Flashpoint," which had an alternate reality outright change the main DC Universe (the New52). Marvel has off-and-on done their, "What If," comics and they tend to either be quite great or just terrible (with rarely an in-between). I was curious what exactly was the idea behind a, "What If," mini-series focused entirely on Miles Morales becoming a different superhero in each issue. Was it a silly cash-grab because Miles is so popular or a clever way to explore the character of Miles through different heroic lenses? Well, having read the first issue where Miles becomes a new Captain America (after exposure to the latest super-soldier serum in the present day) I enjoyed what I read a good deal and see some interesting possibilities for future issues.

If I may spoil a smidgen, it is clear this issue is not a standalone tale, as multiversal travel is discussed and it seems to be strongly hinted various Miles are going to be needing to team up to face the threat of reality itself falling apart. That adds a fascinating little meta element beyond, "Let's have Miles be a different superhero in each issue and leave it at that." Cody Ziglar's writing hints at even more cool stuff coming and Paco Medina's art is always a treat as well. It's a fun issue and the hints that things are going to get crazy (maybe a Spider-verse but just with Miles...a Miles-verse) has my interest especially piqued. This first issue is definitely worth reading, in other words.