The New, "Carnage," #1 is a Satisfyingly Creepy Read 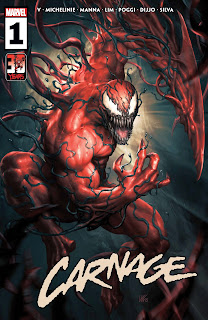 I often don't like Carnage as a character. When they try to make him Marvel's symbiote-infused version of DC's Joker it just is awful. He's not, "Funny," he's a violent force of nature that is practically pure bloodlust due to a psychopathic killer having been bonded to an already violently vengeful symbiote. Carnage works when he is presented more as a horror character than as something funny. Therefore, when an ongoing, "Carnage," series was announced--not a one-shot, not a mini-series, but a theoretically long-term ongoing--I was concerned. Then I was Ram V was writing and relaxed a whole lot. I also saw Francesco Manna was doing the artwork and felt even more cautiously optimistic. Having read the first issue of, "Carnage," I will say I am pleased.

There was a, "Carnage Forever," one-shot that had a little backup story that helps set up some of this first issue (but you don't have to read it) and Ram V provides a story of a serial killer obsessed with Carnage and how good he is at killing. We see most of the story from the POV of detectives after the killer or the killer himself--but we never, "Hear," the thoughts of Carnage. He is presented as a terrifying and violent force that even a serial killer who admires him might not quite understand just what kind of risk he's in for summoning such being. Recent developments in Carnage's life are covered as well--recent comic events made him no longer, "Need," Cletus, apparently. Plus, Manna's artwork is perfect. It is incredibly gruesome and nasty when called for. This is a comic about dangerous people doing unpleasant things, and it excels at portraying that. There is a backup story here too by David Michelinie (writing) and Ron Lim (on art) that brings a good scary vibe too. A young boy who wants the help of Carnage to get revenge discovers how Carnage is basically pure rage and rage is a dangerous thing to fully give into. It's a short but sweet little yarn with some skilled creators attached to it. A nice little back-up that fits the overall tone of this first issue, in other words.

"Carnage," #1 uses Carnage the best way it can--as something scary and violent. Ram V and Francesco Manna bring us a great first issue thanks to utilizing Carnage in the best way possible and the back-up by David Michelinie and Ron Lim serves as the perfect dessert to a delectably disgusting first issue. If you've been desiring a healthy dose of horror in your Marvel comics this should fit the bill.