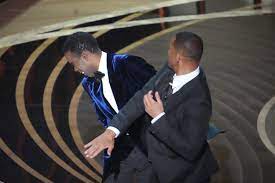 I am not huge on award shows. I just don't watch them much for anything. People deserve awards for working hard but a show dedicated to that tends to just be dull and full of self-congratulatory back-patting from whatever industry or business is being recognized. Therefore, I didn't think I'd bother watching the Oscars. I set our DVR up to tape it so I could at least see some highlights and watch Wanda Sykes' jokes as she is hilarious. Then, before I went to bed I checked online if anything interesting had happened at the show and damn, that was unexpected.

Chris Rock made a joke about Jada Pinkett-Smith lacking hair and looking like G.I. Jane. He apparently was unaware she had recently made it public she had alopecia. Her husband, Will Smith, did not like the joke and as he was sitting near the front of the stage (thanks to his best actor nomination he later won) he walked up there and slapped Chris Rock. He then went back to his seat and twice yelled, "Keep my wife's name out of your fucking mouth." It was sudden, bizarre, and everyone had an opinion on the internet about it. Some said Smith was justified, others stated this arguably puts other comics in danger if people think they can slap them should they dislike a joke, some said it was a bad situation all around, everyone had a take. I don't really have a take, though.

I think this whole thing is unfortunate and that hopefully Rock and Smith can come to some kind of resolution or agreement even if there isn't an exact apology that will be stated by either (when Smith won best actor about a half-hour later he apologized to the Award Academy but clearly not Rock). That's about the best thought I can offer compared to some really weird opinions I've seen online comparing this to Russia's War on Ukraine in some fashion or other random analogies. I just hope something can be worked out from all of this.