I Tried Some Tin Star Potato Chips and Was Impressed 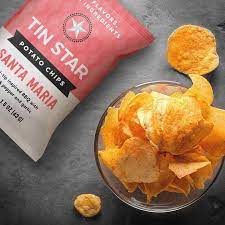 I try not to eat too many potato chips, but I do treat myself sometimes. The other day I spotted a small bag of a brand I was not familiar with, Tin Star. There were a few flavors to pick from but I picked the Santa Maria barbecue flavor. I was quite pleased with what I ate! The chip had a great crunch and the BBQ flavor was on point with a nice peppery kick. Sometimes barbecue chips can almost be overpowering in taste but Tin Star's Santa Maria chips were perfectly on point in terms of not being too much or too little of, "Zing."

I really liked the Santa Maria flavor of Tin Star potato chips and will try some of the other flavors in the near future as well. I'd recommend giving them a taste for sure if you like a tasty chip now and then.

My Usual Disclaimer: Nobody asked me to review a chip for them or offered me money to say nice things, I just felt like discussing a tasty chip I tried. As always, if Tin Star wants to send me a bunch of free chips as thanks for my kind words, I won't say no. No pressure, though.