The Latest Relaunch of, "The Punisher," is Passable but Could've Done a Lot More 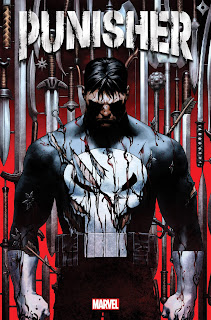 Before I criticize this latest, "Punisher," relaunch let me at least say the art is absolutely fantastic. Gorgeously visceral stuff. I loved the art. Now let's rip into this comic...

Marvel was avoiding using the Punisher in comics as he'd become topical in troublesome ways. Soldiers and police officers were using his logo, as well as dangerous alt-right groups. One of the character's co-creators, Gerry Conway, condemned this. Garth Ennis--a popular writer of the Punisher, did too. The Punisher himself has addressed in comics he is aware he is a vigilante and arguably a bad guy whose only saving grace is he (in his mind) kills people worse than him. Still, the problem persisted. Marvel's response was to change the logo for the latest relaunch and give it a story-based reason. I'm going to spoil the comic's big twist at the end that kind of explains some things (it ain't that impressive) so be aware of that. 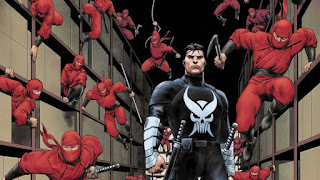 Marvel could have had this Punisher story address Frank Castle/the Punisher being an icon to people who should not idolize him. They could've made it a really cool story. Instead, the Punisher is recruited to lead the secret ninja organization known as The Hand. Why would he work with evil assassin-terrorists? They brought his wife back from the dead. Yeah.

Those who have read Punisher comics for a while may know this concept has been explored before. During, "Dark Reign," the Hood tried to make Castle stop being a thorn in the side of Norman Osborn (his boss) by seemingly resurrecting Maria and Frank's two kids before Frank dismissed it as a trick and took a flamethrower to them. Perhaps something changed Frank's mind about alive-again family members, and I'm honestly not too hung up the continuity of it all as this is the Punisher we are talking about. The Punisher has been killed and brought back to life as, "Frankencastle." He has gone to space to hunt aliens. He piloted an Iron Man suit for a bit as well and that is all in continuity (the stories that don't, "Count," can be even crazier).

The story writer Jason Aaron gives us is perfectly fine that Frank Castle seems to think he can reform The Hand to only prey on villainous people and his new job is why he changed his logo. It just seems like a lazy excuse to alter such a politically-charged logo without actually acknowledging why Marvel changed it. It is like when the movie, "Super Size Me," came out and made the fast-food industry look really bad. Not too long after its release McDonald's announced they were getting rid of that terminology for a variety of reasons without just outright acknowledging the flick made them embarrassed. If you make a change without discussing the actual reasons you did it the whole thing just seems half-assed. I don't blame Jason Aaron for any of this, he's just trying to craft a fun Punisher story. In a vacuum where none of the controversies exists with the character and his logo, it would be another solid little Punisher yarn. We don't live in a vacuum, however, and Marvel usually acknowledges what's going on in the world outside our window in their comics to some degree.

As I said at the start of this wordy review, at least the art is fantastic Jesús Saiz and Paul Azaceta trade-off on art duties depending on if a scene is set in the present or the past. They are amazing and illustrate what the Punisher is known for--bloodshed--with fantastic skill. Perhaps the comic will actually go ahead and touch upon the actual controversies with the Punisher and his logo or the series will just awkwardly ignore it. Either way, at least it will look really good. As it stands now, this debut issue is fine but really lacking considering what it could have actually done.