Television Tuesday: My Overall Thoughts on the, "Moon Knight," Show 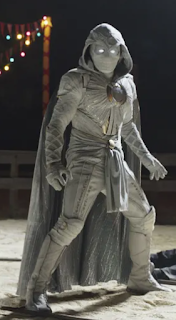 Note: I spoil basically all the twists from the show in this post.

I'm going to go out on a limb and say we will be getting another season of, "Moon Knight," or some kind of movie to flesh things out further. There were too many little things left unanswered and one really big moment in the post-credit scene. Plus, May Calamawy is too good when she beomces a hero, the Scarlet Scarab, to not bring her back in another, "Moon Knight," project or with her own show/movie! Yes, Marc's wife, Layla, becomes a hero that actually existed in the comics years ago (as a male), and she kicks butt. That's in the final episode, however, which I quite liked and was pleased tied everything together. Even if the last episode was quite good, how was the show overall? Odd, but I enjoyed it.

We honestly did not get a ton of Moon Knight in, "Moon Knight." Besides some suited-up action in the 2nd episode and a whole lot of him in the finale, the suit (or suits, as Steven wears the Mr. Knight outfit) was/were used sparingly. The show was instead an interestingly blend of genres as it told the story of Marc Spector and Steven Grant, seeming a bit like a wonky action-comedy with slight horror vibes in the first episode, turning into more of an adventure-filled romp for the second and third entry. I was enjoying the show through the first three episodes but not really finding my attention that piqued. Then things got very weird, and I liked that. Throughout it all Oscar Issac was amazing too, carrying the show through the duller times.

The fourth episode was filled with creepy tomb raiding before pulling the rug out from underneath all of us (when Marc/Steven seem to die) and putting Marc and Steven in a surreal psychological thriller mixed with a sci-fi afterlife via a kinda-sorta mental hospital. The fifth episode kept that vibe going and was really depressing as we saw all the trauma Marc went through and then genres switched again with the finale. Suddenly we have giant versions of Egpytian avatars fighting as if we were watching a Kaiju flick and the aforementioned moments of Layla becoming a hero happen as well as tons of kickass action. I was having a great time watching the final episode but felt a little annoyed when everything seemed to be wrapped up with a tidy bow. Then that scene happened after some credits with Jake Lockley and a big smile filled my face.

The, "Moon Knight," show has been quite different from the comics, but that's okay as the Marvel Cinematic Universe has always tweaked a lot from the funnybooks they draw from. That said, Marc Spector has also had the alias/identities of Steven Grant plus Jake Lockley. The show hinted at Jake but never actually revealed him until that delicious last moment of the show where it turns out Jake has indeed been hanging around all along and is quite the troublemaker. Steven is quite different than in the comics and Jake seems a bit removed from his four-panel inspirations as well, but he still has the hat, so I'm happy. Seeing Jake raises a whole bunch of questions and I want to get some answers in a future season or movie! Plus, again, props are due to Oscar Issac for essentially playing two major roles in the form of Marc and Steven and then a third persona being added to the mix at the end just shows how much range Issac has. He and Calamawy did a ton of heavy lifting for the show and Ethan Hawke was a solid villain if a bit under-utilized considering how talented he is.

In conclusion, "Moon Knight," was overall a good time that slowly turned into a great one. It dipped its toes in various genres and took a little bit to get going but as soon as it let itself get weird and trippy I was pleased. It is a little annoying how it starts strong, then drags a bit until the last third of the fourth episode, but it does eventually kick into a fantastic overdrive of bizarre and exciting from that ending of episode four and on. The entire show is worth watching, just be prepared to get through the duller moments for the really wild ones.