"Mr. Boop," is a Satirical Treat 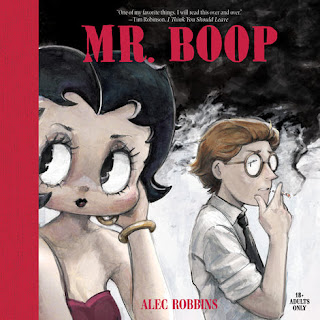 Alec Robbins is married to Betty Boop. It is a 100% real marriage and she is real so when he makes comics about how in love they are and all the sex they have it totally is not violating IP laws. Hence, "Mr. Boop," starts out as a weird spoof of wishful, "I'm going to draw myself having sex with a cartoon character I like," stuff you see on Twitter before morphing into a hilarious mockery of a wide range of intellectual properties and the whole idea of copyright. Things just get stranger as Alec's friends (Bugs Bunny and Peter Griffin) start having threeways with him and his wife, as well as other famous characters. Oh, and Bugs gets a job with Amazon where they don't let him pee, and Sonic the Hedgehog goes to jail for almost killing Alec in a jealous rage (he wishes he were with Betty too) where he barely makes money but gets to pee. 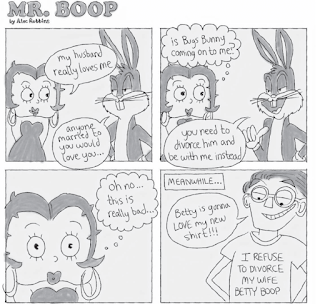 Throughout, "Mr. Boop," reality keeps shifting in stranger and stranger ways, reality itself being drawn into question (pun intended there with how I said ,"Drawn," just so you know). Robbins art style is a treat, cartoony when necessary and startlingly detailed and realistic when called for as well. A number of guest artists stop by within the book too and the original webcomic that incorporated video segments at times cleverly is tweaked to work perfectly purely as a book and not a multimedia experience. Robbins eagerly thumbs his nose at various copyright laws whilst also carefully and repeatedly emphasizing what he is doing counts as parody/satire so please don't sue him. To further delve into how fascinating this whole comic is there's a foreword by F. Stewart-Taylor that was originally published in, "SOLRAD," which discusses what fun little tightrope Robbins is walking. Silver Sprocket has some serious nerves publishing the book, and I applaud them for it. The whole book is a trippy and fun read--I loved it as much as Robbins and Betty seem to love each other. It is now hitting all finer comic shops and I'd recommend picking up a copy for sure!

Posted by David Charles Bitterbaum at 10:15 AM