One Thought on Our Nation and Mass Shootings 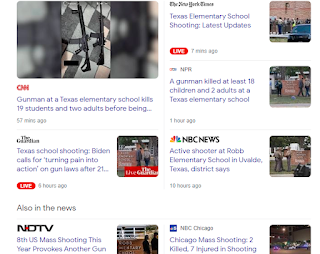 It's been yet another week where multiple times in the last seven days the news was filled with images from a mass shooting. Whether it is a racist attacking shoppers at a Buffalo grocery store or someone barely 18 with deadly weapons at an elementary school, this keeps happening. I've said multiple times my opinions on what needs to be done so I will simply offer one thought today that summarizes my overall response to the alarming normalcy (oxymoron intended) of mass shootings these past years in America:

Until our nation addresses its obsession with this absurd conception that any potentially dangerous yahoo can own a gun because it is their, "Right," none of this will ever stop. Thoughts and prayers won't help. Attempts at laws that stall in Congress or get overturned by courts will do nothing. We need to drill down to our country's weird dedication to this, "Right," to freely wield a lethal weapon with no restriction. The constitution is a living document that needs to be interpreted and tweaked. Clearly, it is time to do that in regards to our 2nd amendment, as I've said before in blunter words. Until that step is taken, we're going to just be in a vicious cycle forever.

That is my thought.