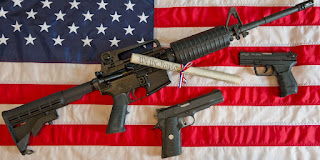 I took some time and mulled over many ways to respond to the tragedy in Florida. Someone committed a mass-shooting at a school and everyone is doing the usual thing of offering thoughts and prayers while refusing to take any real action. When this exact same thing has happened before I post politely-worded posts about gun control, try to gently argue with people who foolishly think more guns will help, point-out how how politicians are in the pocket of the NRA, and basically use logic. I'm done doing that. Trying to be nice with people who value guns and this false ideal of,  "Firearms=Liberty," more than human life is pointless.

Therefore, I simply have one long sentence to say: Fuck the 2nd Amendment, fuck trying to be reasonable with these people who cling to how outdated and irrelevant it is now, and repeal it so cowards can't hide behind it when we want to implement even the simplest safety measures.

Oh, and before you accuse me of, "Politicizing a tragedy," try to claim you can magically guess what our forefathers were thinking before guns became as powerful as they are today, or otherwise argue with me via some other bullshit claim, fuck you too.

It's harsh language, but I'm done being nice, done trying to be reasonable, and if you motherfuckers are so scared the government is going to come take your guns that you buy 50 of them and start a militia (which is a fancy word for, "White-person terrorist group), than you probably should have the government come take your guns away. Look at every other nation and then look at us, we lag behind in healthcare, education, and all the good stuff, but boy-howdy do we lead in gun violence and mass-shootings. That isn't something to be proud of.

The constitution is a living document, it evolves and changes with our times, let's actually do something for once.
Posted by David Charles Bitterbaum at 10:30 PM