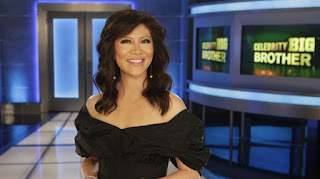 I love the regular, "Big Brother," program that runs on CBS every Summer. I have made a blog post basically every season about how while there are silly challenges and dumb bits, the social experiment of all these strangers stuck in a house isolated from the outside world almost always is fascinating. It makes people's true nature come out and that can result in seasons where everyone is actually weirdly calm, nice, and understanding, as well as seasons where people are complete and total monsters to one another.

When you're stuck in the Big Brother house for up to three months it isn't uncommon for paranoia to become the number one emotion in the house. There is a lot of money up for grabs (half a million dollars) and these are ordinary people who could really use that kind of scratch. It makes for good television. Unfortunately, the first-ever season of, "Celebrity Big Brother," in America (they've had versions in other countries) loses much of the best elements of regular, "Big Brother," and becomes something watchable, but far less entertaining than you would hope.

A friend of mine said about, "Celebrity Big Brother," how, "I think it's pretty boring...but I still want to watch." We discussed how this was probably out of our habit of enjoying, "Big Brother," and it's true. Even though it isn't as interesting right now, it still is kind of fun and like a nice junk food for the mind in-between watching the Olympics. Why is it like this though? Well, the things that made, "Big Brother," so intriguing are basically made moot by the celebrity version. The money is only $250,000 because the celebrities don't really need it, and most would probably donate it to a charity unless they're a jerk. They are in the house for just three weeks instead of three months, so we can't expect them to get too stir-crazy as well. Lastly, they aren't going to act too much of a fool because bad press is the last thing some of them want.

To the credit of CBS and, "Big Brother," these actually are celebrities on, "Big Brother," for the most part in that I've heard of them and/or follow their work. We've got Mark McGrath from Sugar Ray, Ross Matthews who is known for his appearances on comedy programs, Metta World Peace (the man formerly known as Ron Artest who had that infamous NBA event when...well, you know. Shannon Elizabeth is there, some other folk, and the wringer-guest, Omarosa (yes, that Omarosa). Then there are people I never heard of like a guy named James from an old teenage boy-band. Everyone is getting along pretty well but there is still some strategy and backstabbing, hence it being watchable. Plus, Mark and Ross are hilarious and Omarosa makes a good villain even if she seems more mellow since whatever horrors she witnessed at the Trump White House. Still, so much of the usual elements that make it, "Big Brother," are missing.

One thing that is superior to the usual show is how with this being an expedited season there are more episodes more often and things actually happen quickly. We had the premiere Wednesday, an episode Thursday, a two-hour show Friday, one Sunday, and now yesterday. As opposed to the usual, "Big Brother," which can have some days that feel like filler, lots of stuff is always happening in this sped-up run. I almost wish that in the Summer CBS just did a bunch of different, "Big Brother," households in quick succession so things stayed interesting. You may be saying, "Wait, David, haven't you spent most of this article bitching about how longer seasons result in more drama and now you say you like it shorter? Aren't you being hypocritical?" My answer to that is yes, yes I am, because I want my cake and to eat it too.

"Celebrity Big Brother," is not as fascinating to watch as the regular, "Big Brother," but still is worth consuming. I'm enjoying it to a reasonable degree, and the speedy pace is good. If you've never watched, "Big Brother," and the celebrities have caught your attention, it's a good way to dip your toe into the series. If you do normally watch, "Big Brother," it is different for sure, but still decent. I'm more and more excited for when the regular version returns this Summer however.
Posted by David Charles Bitterbaum at 10:15 AM