Always Cool People
Anytime I go to Wizard World I see all kinds of neat vendors, artists, and general snazzy folk. I wanted to share about the individuals I especially enjoyed chatting with and shall present them in alphabetical order by either their company name, or last name. 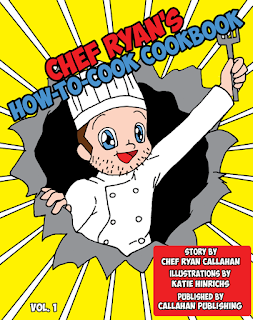 Ryan Callahan
Chef Ryan Callahan was at the show with his award-winning book, "Chef Ryan's How-To-Cook Handbook," that is a combination of a comic, cookbook, and coloring book! It is designed to appeal to kids but has information useful to adult who is only so-so at cooking like myself. Readers can draw themselves into the book, learn all about cooking, and make various recipes. I looked through the book at the show and found it really neat! You can learn more about Chef Ryan and his book here.

Caesar Crawford
I'd actually met Caesar at a previous comic-con a long time ago when he worked for a magazine, but since then he has gone on to become a comic-creator with all kinds of stellar work coming out from his imprint, Revil Comics. He's a great artist and super guy as well. His site is here. 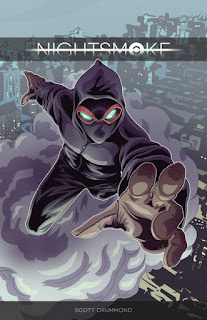 Scott Drummond
Mr. Drummond was at Wizard World promoting the two volumes that have come out so far for his comic series, "Nightsmoke." It sounded look a cool read with its story of a young boy and girl who acquire powers (he can relax his molecules and turn to air, she can focus her molecules and be rock-solid) and have to deal with all the havoc that causes. You can learn more about, "Nighsmoke," here. 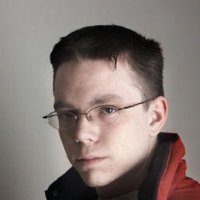 Chris Ehnot
I enjoyed chatting with Chris Ehnot about his work creating cover illustrations for everyone from Zenescope to Coffin Comics. As we are both nerds for things like the kind of paper-stock used on business cards or prints we spent a good chunk of time talking about the printing process for the prints he makes of his work and how he keeps them looking glossy without it wearing off. Anyone who walked by us having this conversation probably thought we were either weird, crazy, or boring. I swear after speaking with Chris I'm sure we are just weird and crazy. You can visit his website and see his work here. 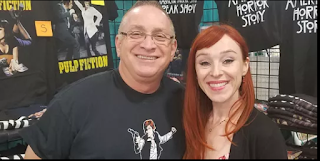 Comic-Con Store
I had a great time talking with Joseph of the, "Comic-Con Store," at Wizard World. He had a bunch of awesome collectibles and Funko Pops. You can visit his site here.

End Zone Collectibles
I had a great time chatting with End Zone Collectibles as its founder and I both have lived in (or in his case, currently live in) the state of New York. He had a variety of stellar toys and action figures for sale and you can view many of his wares on their website. 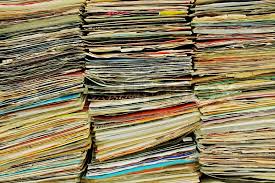 Fearless Readers
Bill Thade of, "Fearless Readers," was at the show with a ton of awesome comics for sale, and a sizable collection of cool indie and underground books. If you ever want to contact bill about his wide-range of titles email him here.

Fine Comic Collectibles
There were a number of people selling products to store your comics, Funko Pops, and so forth at the show, but I was most impressed with Fine Comic Collectibles. The retailer at the booth was a super nice guy named Russel whom I talked with about comics, anime, and all kinds of geeky subjects. I did not feel pressured at all to buy stuff, with him saying how he isn't someone to do a, "Hard-sell," as he feels his prices speak for themselves--and he had some stellar prices. You can visit Fine Comic Collectibles on the internet here. 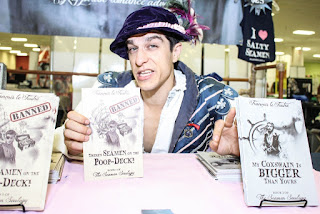 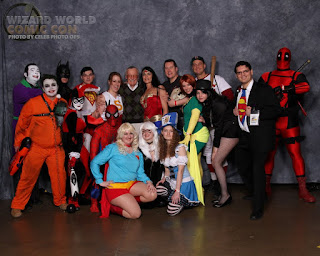 Gateway Superfriends
The Gateway Superfriends are a popular Saint Louis cosplay group dedicated to charity work. Whether it is visiting kids in hospitals, assisting with big fundraising events, or anything else. They are a great group of people who really care a lot. You can find their Facebook page here. 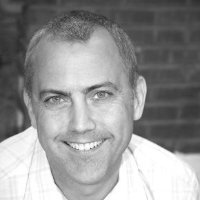 Happy Fun Books/Dan Killeen
Dan Killeen of Happy Fun Books was at Wizard World, and I of course always enjoy his books. He was there with his latest publication, "Robert and the Robots," which I eagerly bought and am excited to read to my son, Clarkson. Check-out Happy Fun Books here! 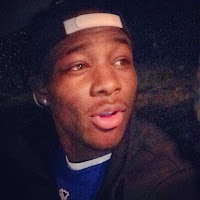 Keith on Da Beat
I chatted with the folk at the booth for local radio station, 104.9, and greatly enjoyed my conversation with Keith, or Keith on Da Beat, if one is referring to his DJ persona. He was great to chat with and can be found on twitter here. 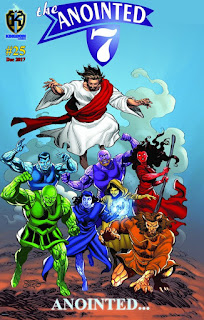 Kingdom Comics
Brian C. I. Bradley of, "Kingdom Comics," was at the show selling copies of his ongoing series, "The Anointed 7," a religion-themed series. It is up to issue #25, which is an impressively high number for an indie book! You can learn more about, "Kingdom Comics," and their books here. 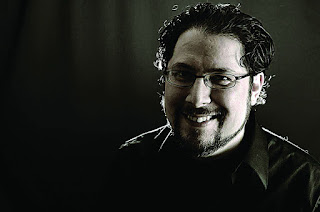 Jai Nitz
I am a big fan of a variety of Mr. Nitz's comics and he was kind enough to sign a number of them for me! He is known for a wide assortment of works, including El Diablo. You can say hello to him on Twitter here.

Online Starlets
I saw a booth with some cosplayers handing out cards, which isn't abnormal for professional cosplayers. I also saw they had prints for sale of them in various outifts, which again is common. The more surprising thing was they were handing out cards for a website that appears to specialize in softcore-ish cosplay-themed pornography. I don't have anything against porn, and it is fascinating to think how geek culture has grown so much in popularity there are now whole websites dedicated not just to women in various states of undress, but getting naked while dressed as assorted super-heroes. Their site is here, and obviously not safe-for-work.

Shorething Collectables
The folk from Shorething had so, so many Funko Pops at the show. It was amazing to look at the wide variety and they had almost anything I asked about in stock. Visit their website here!

Spike
"Spike," is the name of the man also known as, "That Lost in Space Guy," who sells classic toys and comics. He was fantastic to chat with and had some good books for sale at the show! His website is here. 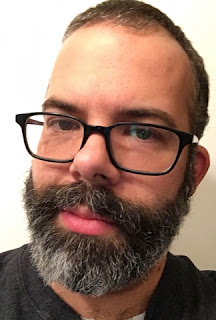 Kyle Starks
Mr. Starks is behind a number of stellar comics, such as, "Sexcastle," "Rock Candy Mountain," and he is currently writing (and sometimes illustrating), the massively-popular, "Rick and Morty," comic. He was a hoot to talk with at the show and kind enough to let me commission him to draw me a stellar Moon Knight picture, which I'll share in my later post about the cool stuff I got at the show. Kyle Starks' website is located here. 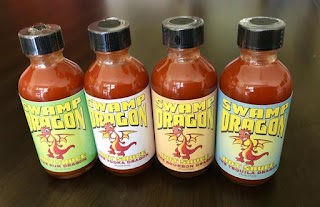 Swamp Dragon Hot Sauce
I was intrigued when I heard about Swamp Dragon as their hot sauce does not use vinegar as a preservative, which can give hot sauce a, "Meh," taste. Instead they use trace amounts of alcohol which gives the sauce a nice smooth flavor. They have four flavors, Tequlia, Rum, Bourbon, and Vodka. I got the four-pack of all the flavors as they all were stellar. You can order some for yourself online here. 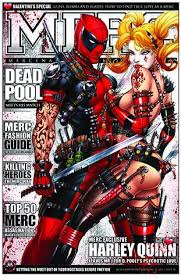 Jamie Tyndall
Jamie Tyndall makes awesome-looking comic covers with his neat faux-magazine style. I always enjoy seeing him at shows and chatting. His stuff can be found online here. 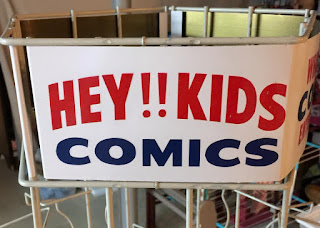 Wayne Kent Comics
My good chum Justin of Wayne Kent comics was at Wizard World with a smorgasbord of books. He also had an old, "Captain America," title a friend who I explored the show with Friday wanted so they were able to cut a deal! Wayne Kent comics is on Facebook here. 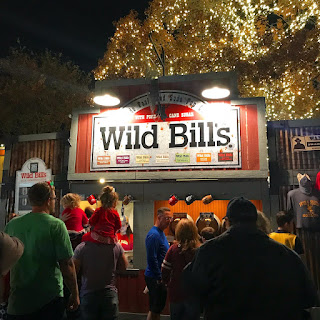 So Many Awesome Folk!
I got to either meet or see again a number of cool people. It was fantastic chatting with everyone and my next post will cover the cool stuff I got at the show!
Posted by David Charles Bitterbaum at 9:35 AM