Television Tuesday: Is it Weird I Would Watch an Actual, "Web of Fries," Movie? 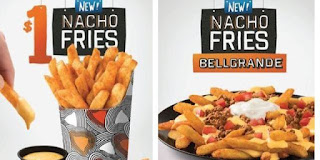 There is an ad on the television currently for how Taco Bell now does their own unique french fries. This is not an ordinary advertisement however, with it in fact seemingly like a thriller movie covering a conspiracy to prevent french fries from being interesting and having any kind of condiment besides ketchup. It sounds silly, and it is, but it works. It ticks all the standard thriller-movie trailer boxes, and that is the self-aware point. Even if it is meant to be a bit of a parody however, it is so good at being a joking imitation of something, it feels real. Watch below:

Josh Duhamel does a really good job acting as he finds himself increasingly enmeshed in a shadowy plot complete with an evil organization, mysterious info-provider, and car chases. It is so straight-faced that is what actually makes it kind of funny, but it also is just so competently done that it seems more professional than half the actual flicks that have come out lately. I mean, watch the trailer for a stinker like, "Paranoia," which had a great cast but was terrible and looked stupid, and then view, "Web of Fries," and tell me which one looks better (and yes, "Paranoia," bombed at the box office due to looking so lame, if you're curious).

The ad maybe isn't getting a ton of buzz, but I'm not alone in finding it smart and subtle, or wishing it we could somehow see the whole flick. I haven't actually tried the fries yet and early reviews are middling at best or call them a, "Chemical Hellbeast," at worst. Even if the fries themselves suck however, the trailer for the faux-movie about them is advertainment at its finest
Posted by David Charles Bitterbaum at 12:45 PM