"Out of Nothing," and, "Dalston Monsterzz," Are Two Stellar New Titles from NoBrow

NoBrow's Got Good Stuff
I of course greatly enjoy the titles that come out from Nobrow. For a good deal of time their press person was none other than Tucker Stone, but he actually left the position a bit ago to take over running The Comics' Journal and further pursue his taxidermy business (their slogan is, "You shoot em' we stuff em'). Hannah Moushabeck took over the position of directing press after surviving the traps I assume Tucker left at Nobrow to decapitate anyone who dared to take over the job, and Geoffrey Lapid is now the marketing manager. Both were kind enough to send me some titles they thought I might like based on what I've reviewed before from Nobrow. This resulted in my reading of, the recently-released and soon-to-be-released books "Out of Nothing," and, "Dalston Monsterzz," which are both very different, but equally enjoyable reads. Let's review them, shall we? 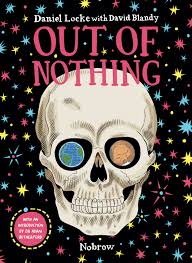 Daniel Locke and David Blandy basically give us a snapshot view of the entirety of the universe's history in a bit under 250 pages. From the birth of said universe, to caveman times, the Manhattan Project, the discovery of DNA, and early instances of sampling in Hip-Hop, they really cover a lot of ground. The basic concept is to show how all throughout time amazing things have happened that seem to come, "Out of nothing." So much amazing stuff has formed as an idea, much as how the basest molecules link us all together. Whether we are remixing DNA or rap beats, we continue to alter and synthesize the world in fascinating ways, much how our Universe formed through its own changing and remixing of forms until life sprung into existence on Earth.

It sounds like a really heavy concept, but thanks to great illustrations and an optimistic narrative things don't get too crazy or complex, with the book never feeling like it is talking-down to readers so much as encouraging us to marvel at how even the seemingly simplest things are more intricate than we'd ever imagine. It is a great read and I appreciate the back-matter at the end of recommended reading to learn more about all the subjects briefly touched-upon at various points in the book.
5 out of 5 stars. 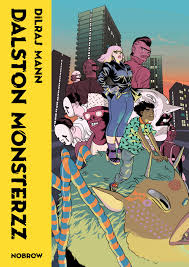 Written and illustrated by Dilraj Mann, his art style is very unique, with the only other comic illustrator I can even think of him slightly resembling maybe being Jonny Negron in that they both excel at drawing fully-figured women with expressive faces. Otherwise, Mann stands completely alone in his art and that would be sad if he sucked, but as he's stellar that is an impressive thing indeed. "Dalston Monsterzz," is about East London as it is increasingly gentrified, and the impact this has on minority residents and disaffected youth. Also, the city literally has monsters running around--a fantastical element that actually compliments the serious and realistic stuff quite well.

Within the story it is clear the monsters are just another resource that the rich and powerful want to utilize whilst the youth want to keep them free and independent. The actual monsters of the story could be a metaphor for almost anything that starts out rebellious and cool before co-operated by commercial interests and corrupted beyond any recognizable form. The monsters within the story are gorgeously illustrated and while the story at first seems like a simple, "Rescue our kidnapped friend/boyfriend from the evil businessman," the socio-political aspects of the story and some intriguing last-minute twists keep things interesting--and as I said, Dilraj Mann has an amazing artistic style I could stare at all day.
5 out of 5 stars.

Exciting Upcoming Titles!
"Out of Nothing," came out on 2/2/18 and can be found in all quality book and comic shops; "Dalston Monsterzz," can be purchased as of 3/5/18, so not too far in the future! I myself loved both books and for sure would recommend picking them up. Over these years NoBrow has continued to create quite the catalog of excellent titles, and these two new books show that trend is only continuing!

Note: NoBrow supplied copies of these books for the purposes of review, with it always understood I will express my honest opinion. They generally are wise enough to send me stuff they know I will like, however.
Posted by David Charles Bitterbaum at 12:31 PM