This Trailer for, "The First Purge," Feels Uncomfortably Plausible

I saw the premiere trailer for the upcoming, "The First Purge," movie and found it incredibly effective at being unsettling for a number of reasons. It came on during my viewing of, "The Colbert Report," the other night and at first sounded like a cliche political ad with its talk of being a proud American. I thought it was an ad to elect someone in an upcoming election, frankly. Then it takes a hard swerve into saying how we can proudly have our kids tell us they want to,"Purge," too, followed by an image of a red hat not unlike the kind a certain President has worn reading, "The First Purge." Goddamn is that uncomfortably strong symbolism. Observe:

I liked the first, "Purge," movie but it seemed unsure if it wanted to offer political commentary or just be a home-invasion horror flick. It had a striking concept of an America where for one night all crime is legal under the auspices it helps us reduce violent urges, but it lacked much oomph outside of Ethan Hawke offering a stellar performance as always and hinting at the idea that maybe the Purge was more of an excuse to hurt the poor and disenfranchised than anything else. The 2nd movie, "Anarchy," superior as it had a bigger budget thanks to the first flick and injected a lot more political and social commentary along with morphing into more of a fast paced action-horror flick in comparison to the first movie being a bit too slow of a slow burn. Plus, "Anarchy," made it clear the Purge was a way to keep those less wealthy or powerful weak and thinned-out. I didn't see the third movie, "Election Year," yet, but it apparently provides even more clever observations on politics, as the title would indicate. The thing about, "The Purge," movies that seems to make them resonant with viewers (besides the scares and thrills) is how every year the idea of our government proposing such a terrible and destructive idea seems less crazy--and that is really terrifying.

Our elected officials talk about migrant workers as if they are a cancer as opposed to dedicated people after the American dream. The, "inner-city," is spoken of as if it's a war-zone full of barbaric black people undeserving of being treated as human beings, with police shooting unarmed men and women of color without any consequences being shrugged at. Our President has inspired once-closeted Nazis and white supremacists to march openly with torches and discuss their desire to separate races and religions, or outright eliminate the, "Wrong kind of people." Transgender individuals find themselves at more risks of violence than ever with legal protections getting rolled-back, and being openly gay in the U.S. in motherfucking 2018 could still get you fired from a job in many states, with your employer protected for doing so under their, "Religious Liberty." Taking into account all this would it be utterly absurd to picture some politicians thinking a Purge sounds just dandy? Again, the increasing relevance of what was at first a far-fetched horror concept is terrifying. 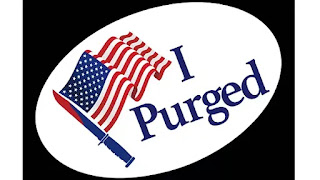 As our nation seems to accelerate into an alarming declination of empathy it is only fitting we get a movie about how the Purge started, if for no other reason than that our politicians can probably use it as a blueprint for when things get so bad some moron actually proposes something identical or vaguely similar under the guise of it being, "Good for our country." Everyday it seems more and more plausible, and that is scarier than the movie could ever be.
Posted by David Charles Bitterbaum at 8:12 PM