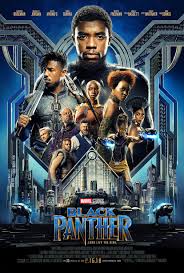 On Sunday my wife and I were able to go see, "Black Panther," in theaters as her Mother was kind enough to watch Clarkson for a bit. We had an amazing time and as the movie has been out for a week now I thought now would be a good time to post a spoiler-laden review, as most folk have by now seen it or don't mind spoilers at this point, I assume (otherwise, quickly look away from this post). Let's begin discussing the movie, shall we?

The first thing I want to get out of the way is that this is one of the best Marvel movies ever, but not the best Marvel flick. I'd say the title of, "Best Marvel Movie," is a tie between the original, "Avengers," and, "Captain America: Civil War," but this is damn near close to the top, living up to all the incredible hype and expectations that surrounded it. With such a huge opening weekend last week, a killer soundtrack that is selling well, and great reviews from critics and theater-goers alike, I don't want to ever hear anyone claim that a movie with a black lead and/or a predominantly minority cast can't make money. Director Ryan Coogler has made two other great films ("Fruitvale Station," and, "Creed,") but clearly the third time is a charm with this being his latest masterpiece. 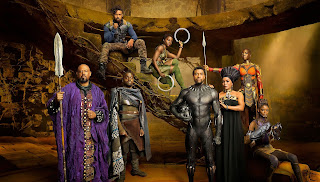 Carefully plotted and full of wonderful imagery, characterization, and some genuinely surprising plot elements, "Black Panther," is as lush-looking as it is smart and clever. It is of course a Marvel film but besides covering some key elements of, "Civil War," and the fact that Andy Serkis' villainous character, Klaue, briefly was in the 2nd Avenger's film, this mostly stands quite alone nicely, with only the 2nd end credit scene with Bucky AKA the Winter Solider, obviously being in there to help set some foundation for how he'll most likely help defend Wakanda from Thanos in the upcoming, "Avengers: Infinity War." Also, as fun as it can be to have an Infinity Stone pop-up in nearly every Marvel film, I was honestly a little glad we didn't see one here.

"Black Panther," is an incredible film, but interestingly enough some of the supporting cast deserves much of the credit for this, with Chadwick Boseman doing a stellar job as King T'Challa/The Black Panther, but Michael B. Jordan basically stealing the show as the villainous-but-somewhat-understandably-so Erik Killmonger. Besides Loki the Marvel films have at times struggled to have good bad-guys, but Jordan's Killmonger fits the bill spectacularly. He does terrible things, but the scary part is some of what he says makes perfect sense. He sees a world where people of his skin color suffer under oppression and is disgusted at Wakanda isolating itself and hiding away technology that could make a stark difference. He is an awful person, but he had some atrocious things done to him which resulted in how he turned out. You really feel some sympathy for the guy when he has his vision from the heart-shaped herb and cries about the death of his Father due to his Uncle--e.g. T'Challa's papa, killing him (in defense of someone else, sure, but it still is a tragic scene when we witness it). Jordan is an amazing talent who needs to be considered an A-list actor as roles such as this prove. 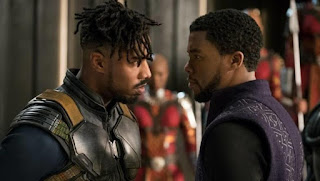 M'Baku is also a wonderful addition to the movie, taking a long-troubling stereotypical Marvel character known as, "Man-Ape," and turning him into a introspective and complex person, as opposed the racially-troubling African super-villain in an ape-suit (no, seriously). Much of the credit for this is due to actor Winston Duke, who infuses the role with as much humanity as he does humor and impressive physicality--this man is tall and muscular for sure! Lupita Nyong'o is also astounding as a member of the King's royal guard who knows how to handle weaponry better than anyone else. Her mixture of stern statements and sly humor elevates the role of, "Bodyguard for the King," to something really special.

"Black Panther," is a stellar movie, has made a ton of money, and hopefully signifies a change in how studios often discount films that star mostly people of color as not being worth the effort due to the possibility of a supposedly low return on their investment. Marvel invested plenty into, "Black Panther," and is gonna get the money back to a huge degree. "Black Panther," may not be the best Marvel movie ever, but it is a damn fine one and required viewing for anyone who likes Marvel flicks, hero-movies, or masterful film-making in general.
5 out of 5 stars.
Posted by David Charles Bitterbaum at 12:26 PM