The Joy of Ordering Comics

Diamond Comic Distributors publishes and distributes almost all comics, and "Previews," is the magazine published by Diamond every month that contains all the comics coming out in about 60 days for comic shops to pre-order. Due to a bunch of mergers and bankruptcies back in the late 1990's Diamond Comic Distributors essentially have a legal monopoly on the comic-book publishing and distribution business. Therefore, if you have a comic-book that you have any hope of being in comic-book stores, you gotta be in, "Previews." At a recent big retailer comic-event known as Comicspro a whole bunch of changes were announced to Previews that might have a big impact on a variety of things. Let's break down the four biggest changes: 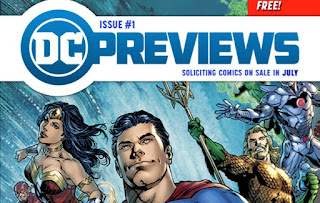 DC is getting its own mini-magazine
For some time Marvel has had their own dedicated mini-magazine for, "Previews," separate from the main book. Starting in May of 2018, DC is going to do this as well. This means if you want to look at everything coming-out in the near future you now will be juggling the main, "Previews," magazine, the Marvel booklet, and a DC booklet--and, "Image+," if you want to spring for that sampler-publication. It thankfully isn't wasting more paper ("Previews," can be the size of a small phone-book) because DC is essentially just shifting their pages from within the main magazine to their own booklet. Still, it does make me scratch my head as to how this really benefits anyone. After all, if you buy the main magazine you get the booklets for free, and many comic stores will give customers, "Previews," for free anyways if you order enough stuff. I suppose somebody thought DC going to its own booklet was smart however, so that is what shall occur. 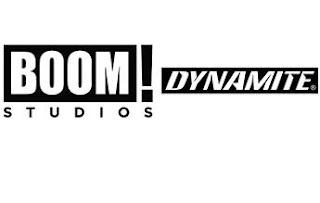 BOOM! Studios and Dynamite will be Premier Publishers
Premier Publishers are comic-book companies that have enough sales and market-share to be in the front of, "Previews," magazine and get their own fancy sections. DC was one of these premier publishers along with Dark Horse, Image, and IDW, but now with their moving to a separate booklet the premier section shall look pretty light. At least, it would except for the fact that it will be getting not one, but two new premier publishers. BOOM! Studios has often been noted for getting a lot of market-share, at times even outselling other premier publishers. Therefore, it is a no-brainer that they will now be at the front of the magazine, which they proudly announced in a speech.

Dynamite is another strong force in the comic-field and will be gaining Premier status as well, which makes sense. Besides perhaps Fantagraphics and Valiant, that is essentially all the big-dogs in comic-book creation now at the front of the magazine or in their own booklet. If you already read books from these folk nothing will be affected besides their placement in the magazine, but theoretically it will help attract newer readers who skip flipping-through the back-end of the magazine.
Manga will have it own section (again)
Once upon a time manga-specific publishers had their own section in, "Previews," but that ended. With manga seeming to be very popular once more however it will yet again have its own special area within, "Previews," with, "Comics, Graphic Novels, and Print," being their own merged thing. Again, this isn't too big of a change for people who already read manga or completely ignore it, but theoretically (there's that word once more) it could increase those hypothetical and ever-so-hard-to-actually-find new readers.

Online Pull Lists
This isn't something that will affect the magazine directly, but is more of a concept that will grow out of the magazine. Basically, Diamond will have an online service call, "Pullbox," which will allow consumers to tell their comic shop exactly what they want through the internet and then the stores will have it ordered and sent to them, if I understand correctly. Many comic stores currently have their own methods of doing pull-lists, be it a website they run, having customers simply email them orders, and so forth. Supposedly this will streamline things and allow retailers to keep easier track of what customers want. It will be free for customers, but if retailers want to use it they have to cough-up the cash to Diamond for whatever prices are, "Announced later."

If this were utterly free to everyone from the kindness of Diamond's heart (heh, a corporation that cares about people, could you imagine?) I could see it being popular, but essentially forcing retailers to use your digital comic-ordering system that you're going to attempt to make customers all excited about in order to have them pressure shops just seems kind of extortionist in style--"Nice bunch of customers you have here, we made them really like this 'Pullbox' service we announced. It would be a real shame if they left your shop for one that's willing to pay us for it." Personally, it sounds like a lot of effort to me for a customer and retailer, so I'm going to continue just emailing my shop what I want or simply verbally telling them when I stop by their store or make an uninvited jaunt into their house to eat their porridge because if Goldilocks can break-and-enter without any consequences why can't I?

Will all of these changes be for better, for worse, or have relatively no impact on the market of comic-books? I don't know, and if I did I would probably be a pretty popular market-speculator. I'm not though, because I have zero clue how this could all turn out. I just hope things go well, because I want the comic-market to be successful as someone who obviously loves comics. That, or this monopoly will be the death of the comic-book industry eventually and it'll go down in mightily impressive flames as publishers scream, "Noooo, buy our lenticular variants, please!" I'm gonna try to be optimistic tho.
Posted by David Charles Bitterbaum at 2:38 PM