Flashback/Film Friday: Considering the Varying Tones of the, "Friday the 13th," Franchise 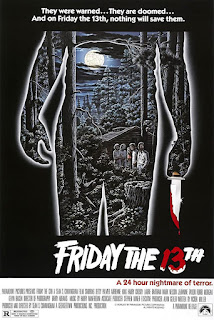 Today is, in fact, May 13th and it is a Friday. It is Friday the 13th.  The origins of why the day is considered unlucky have variations, but nowadays folks just find themselves wary upon any Friday the 13ths. I have never found I have especially bad luck on such a day and instead associate it with one of my favorite horror franchises. Yes, "Friday the 13th," is quite the storied line, with essentially 12 movies that feature the branding or star the slasher, Jason Vorhees. Interestingly enough, the movies don't just vary immensely in quality (as to be expected), they have intriguingly different tones flick-by-flick.

The first, "Friday the 13th," barely has Jason, he's more of a victim than anything. His mother is the killer and folks forget that. The flick is creepy and eerie with brief moments of gore but nothing like some of the later films. "Part II," introduces Jason as the killer and is also a creepy and dark yarn. "Part III," was originally in 3D and relies on some lame kills that maybe looked better with that effect but frankly I find the third entry to be dull (the jokes fall flat as well) and only notable as the entry in the franchise that introduces Jason's famous hockey mask. Thankfully, "Part IV: The Final Chapter," is my second favorite of films, giving us characters we actually care about in a story that is entertaining. Up to this point the movies have been relatively minimalist horror films, a gross-out misfire, and another solid entry. The tone hasn't shifted much, yet, but it does before long. 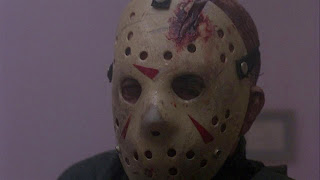 Let's not talk about the fifth film, "A New Beginning," much as it is boring and reveals the killer isn't even Jason. It tries to be a slow burn of creepiness but is drab. However, then we hit, "VI: Jason Lives," which is awesome. Part VI hits the perfect tonal balance of some horror, some humor, a helping of fun action scenes, and just is a treat to watch. Suddenly everything gets a bit science-fiction with, "VII: The New Blood," as it is basically, "What if a girl with telekinesis like Carrie fought Jason?" It isn't bad, it is just strange. "VIII: Jason Takes Manhattan," is basically just Jason killing folks in gruesome ways on a boat with a few minutes actually spent in New York City. It tries to be funny at points but marks--in my opinion--the point the franchise started going downhill.

"Jason Goes to Hell," is the ninth film. I've discussed before how it is awful. It starts with a promising idea--Jason is actually killed by a Government task force--but then goes off the rails with the introduction of magical possession, Jason having a secret sister, horrendously lame humor, weak special effects, and it just sucks. It is followed by, "Jason X," which imagines Jason in space, and if you take it as it is--a dumb silly movie mixing sci-fi with jokes--it isn't awful. The incredibly mediocre, "Freddy vs. Jason," only works as well as it does thanks to the power of nostalgia and mixes the silly-and-scary to a decent degree as it tones down both characters' weirder aspects to make them mesh together in a single film as they go head-to-head. 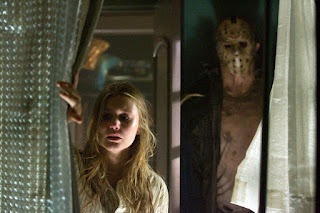 In 2009 there was a reboot of sorts simply titled, "Friday the 13th." It was completely unremarkable and not bad, I just remember basically zero things about it. It was just a generic horror movie with Jason wedged into it. That's been it since then as the franchise had some legal disputes over the rights. Whether we ever get another, "Friday the 13th," remains to be seen, but it would be ironic if the unkillable Jason were finally stopped by intellectual property disputes. As it is, the franchise leaves behind an interesting assortment of films.