Film Friday (Ignoring How it is Sunday): The Bob's Burgers Movie 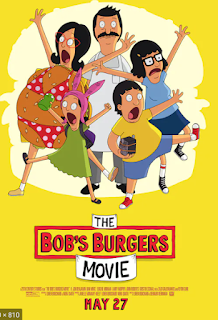 I am a big fan of the television show, "Bob's Burgers." Seeing that it has a movie had me excited and today I was able to see it with my wife, Samii. I wasn't sure what to expect. Would this be like a feature-length episode, but even funnier? Would the flick suffer from being longer compared to the tight runtime of the show or would it benefit? Well, having seen, "The Bob's Burgers Movie," I can say that it is as great a time as watching an episode, just a little longer/a bit more epic.

Without spoiling too much of the movie beyond what trailers have shown, a huge sinkhole forms in front of the restaurant right as a chunk of money the bank is owed finds itself overdue. Things just get zanier from there. Hilarious quips are said, adventures are had, and it is basically a solid, "Bob's Burger," yarn that longtime fans or casual viewers will both find pleasurable. The animation style is a little different, looking a bit more expensive for the flick and there are a few fun and in-depth musical numbers with very well-animated choreography (although this movie is by no means a musical). "The Bob's Burgers," movie is simply some good solid fun.