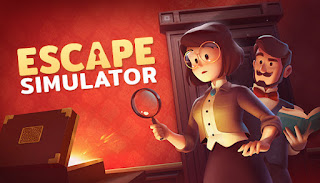 There are real-life escape rooms people go to. I have been to some and despite being bad at puzzles I have, "Won," some thanks to having a skilled group with me. There are also video-games that dabble in, "Escape this place," kind of gameplay but they are nothing like regular escape rooms. John Walker of Kotaku has played, "Escape Simulator," however, and finds it is a startlingly accurate virtual representation of what it is like to do real escape rooms.

The rooms come with a timer but that is just to get a trophy, you can take as long as you want to figure a way out of a room. I appreciate that as someone who always finds the timer with real-life escape rooms stressful as it ticks down and everybody runs around the room in a panic. You can visit the website for, "Escape Simulator," here and decide if it looks like something you'd want to try!