"Mad As Hell," is a Fantastic Book About the Amazing Movie, "Network." 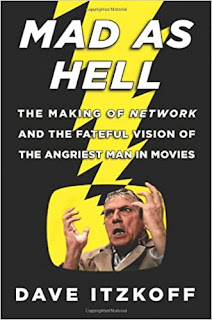 "Mad As Hell," is a book that via a number of interviews and lots of research done by author Dave
Itzkoff tells the story of, "Network." "Network," is a movie that when it came out in 1976 seemed absurdly far-fetched. It talked about a World where news divisions focused more on getting outlandish content and having popular hosts spouting controversial theories than telling the truth. It pictured a World where it was not so much politicians or countries that ran things, but major corporations who actually held the reins of our planet. Basically, "Network," predicted the future to a terrifying degree with one of the bleakest comedies you'll ever watch. Not that it lacks hilarity of fantastic quotes such as the famous, "I'm mad as Hell and I'm not going to take it anymore," which has been altered and used so much it would risk losing its vitality were it not so powerful.

Itzkoff has much of the book focus on the man who wrote, "Network," and spent much of its development and filming closely supervising it, Paddy Chayefsky. The first seeds of the idea all the way to it winning Academy Awards and then the aftermath and what, "Network," looks like when examined through the lens of the present day are covered skillfully. I've said for years how, "Network," is one of my favorite films and it is shocking how despite being over four decades old it only manages to become increasingly relevant and topical every year. Itzkoff's book provides a great deal of backstory, context, and plenty of fascinating facts. It's the perfect book for anyone who loves, "Network," and wants to know more nitty-gritty details about the flick and how it managed to foretell so much. The book actually came out back in 2014, but I got it as a holiday present some time ago and read through it in a couple days recently as it really caught my attention--I highly recommend it.
5 out of 5 stars.
Posted by David Charles Bitterbaum at 1:29 PM