Television Tuesday: "Westworld," Season 3 Has Finished, It Was Alright 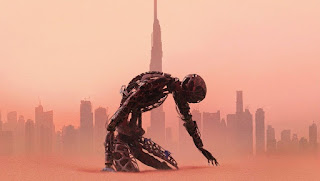 In the end, season 3 of, "Westworld," was disorganized but entertaining, with amazing actors and great technical effects and atmosphere compensating for a so-so plot. In other words, it was, "Westworld." In all seriousness, however, I am one of those people who think the 2nd season was amazing (I liked the first season a lot too, of course, but season 2 was better) and I've always enjoyed the amazing talent on this show (Jeffery Wright, Evan Rachel Wood, Ed Harris, Thandie Newton, a Hemsworth brother, Tessa Thompson, Anthony Hopkins in earlier seasons and even more great folk), but season 3 was a bit lacking and seemed all too impressed with itself.

When I say Westworld seemed too impressed/pleased with itself I refer to its tendency of liking to reveal a twist and act like its some Earth-shattering revelation--everyone is so shocked--when those of us actually watching at home just kind of mumble, "Okay," with vague interest. The last episode of this season was basically a lot of, "The Westworld Affectation," as I call it. We see the last Dolores copy, we learn Serac (Vincent Cassel) has been a willing puppet of Rehoboam, Dolores actually wants to exterminate humanity, no she actually wants to set it free, Caleb (Aaron Paul) knows her from his time in the park as a military recruit, Dolores wanted to be absorbed by Rehoboan all along, et cetera, et cetera.
Past seasons of Westworld usually had a stand-out episode or two, but season 3 lacked that, it just had some great moments--ones that were mostly affectation-free. Bernard meeting his human predecessor's wife (played by Gina Torres who also portrayed her way back in season 1) for real (when he, "Was," Arnold) actually really got to me, as his dementia-stricken wife vaguely recalled him (as Arnold) and the heartbreaking loss of their son. I don't know what about it made me tear-up other than how it's so well-acted and a moment of genuine emotion in a show that often can be as lacking in feeling as a robot (no offense meant towards the show's hosts, of course).

As for other moments that really grab watchers, the penultimate episode with Ed Harris as the Man In Black/William facing all the versions of himself in an alternate-reality therapy program and going way against the program and killing them was a hoot too. Frankly, Ed Harris has always made William a much more interesting character than he has any right to be--a lesser actor would make the lack of actual characterization for William quite apparent. "Westworld," seems to know this as even though it seemingly kills William in the post-credits scene, there's a robotic version lined-up and ready to wreak havoc too.
Besides some stand-out moments, like the ones above and a couple others (the sex-club fight scene set to an orchestral version of The Weeknd's, "Wicked Things," for another example) it was a fun show with the highest-quality production, but a lack of much content that only manages to be as good as it is thanks to an amazing cast, stellar atmosphere, and those little moments that hint how the show could be more...before it falls victim to its aforementioned, "Westworld Affectation." I thought season 2 had enough ingenious bits to be one of my shows of the year of 2018. Season 3 was good, but I can already tell you this ain't making any best of the year lists for me for 2020. "Westworld," was renewed recently for season 4 and I am legitimately curious where it could go. Hopefully, whatever it does we'll get some James Marsden. I missed him this season.
3.5 out of 5 stars (for the entire season).
Posted by David Charles Bitterbaum at 5:17 PM