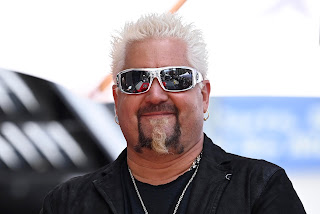 As this article on Buzzfeed discusses, Guy Fieri is a pretty cool fellow. For quite a while Fieri was often mocked by the internet for his over-the-top appearance and silly catchphrases, but over time people have come around. A stand-up comedian named Shane Torres defended Fieri, folk noticed Fieri raises a lot of money for charity, helps a lot of people such as children who want to learn to cook, and the while time Fieri has made it clear he's aware people mock him for looking so zany, he just doesn't care.

There is really no horrific scandal for Fieri, he's just a sweet guy. There once was a rumor started by a disgruntled fired employee that he was homophobic, but that was quickly quashed by it being pointed out Fieri's own sister whom he was extremely close with (and who passed of cancer some years ago) was gay and he supported with her (and continues to support) a number of LGBTQ initiatives. The meanest thing people can say about Fieri is that he's a bit much and his food is unhealthy, but you know what? Him, "Being a bit much," is basically his brand, and you complain his food is unhealthy but then you want to go to a chain restaurant and shovel some, "Garbage fries," in your mouth while tut-tutting about Fieri, like a hypocrite. Meanwhile, he's promoting junky food, yes, but from locally-owned places as opposed to an Applebee's. 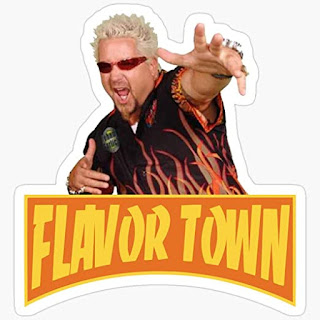 Guy Fieri is just a cool dude who wants to make tasty food and spotlight others who make tasty food on his shows like, "Diners, Drive-Ins, and Dives," as well as, "Guy's Grocery Games." Yes, the alliteration is a lot, but what did I just say about Guy? I'm a fan of Guy Fieri and enjoy his shows while realizing his unique fashion style and tendency to yell excited catchphrases can irritate people. Still, even if you bugs you, Guy Fieri is a really cool...guy.
Posted by David Charles Bitterbaum at 10:34 AM