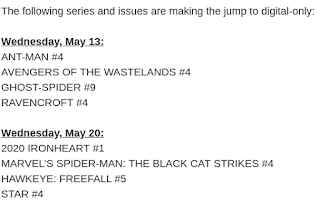 In news that both makes sense but also is kind of annoying, Marvel is going to make some of their comics digital-only that have already been coming out. I understand making some lower-selling titles available solely as digital comics that are then later collected in physical form, and that happens often. A lot of the titles they announced this happening with have had physical issues already released, however.

If you wanted to read the 3rd issue of, "Ant-Man," or the 4th issue of, "Avengers of the Wasteland," as a floppy, you are now out of luck. You've gotta either buy the book digitally or wait for a collection. Also, I kind of get the vibe many of these books are going to get canceled shortly if this is happening (or some were already just mini-series, natch). This is pretty darn annoying and I also feel bad for comic stores that now will have customers who were reading certain books saying, "Where's my copy of, 'Hawkeye: Freefall' #5?" only to be told it can only be had digitally or in an eventual trade paperback collection.
I understand a lot of this probably comes as a reaction to COVID-19 and how it shut-down the comic industry for a bit of time. I also see how Marvel may not want to flood comic-stores with books either whilst also wanting some titles to come out and generate money/reader interest before they start shipping books again the 27th (general shipping resumes the 20th but Marvel ain't ready till a week later). Still, I wonder how much this indicates what the future could hold for titles from Marvel too in regards to more books being digital-only before getting collected? Many things to ponder.
Posted by David Charles Bitterbaum at 9:37 PM