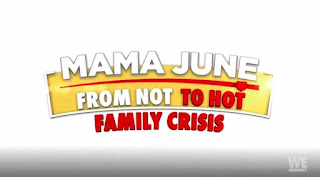 Watching the latest season of, "Mama June: From Not to Hot," which has the additional subtitle, "Family Crisis," reminds me of the classic play by Samuell Beckett, "Waiting for Godot." Basically, the entire play centers on the main characters talking about and waiting for Godot, who never shows up. Godot is covered in-depth and the center of focus, but does not ever appear. Now, since developing a severe drug addiction and horrifically codependent relationship with a sleazebag named Geno, Mam June never sees her family and has zero interest in her show. She got healthy, had weight-loss surgery, did funny shenanigans with her family, and then disappeared to spend her time at casinos or selling anything she can for drug money. The show didn't stop though, it just shifted focus a bit.

Now the show is more about the kids as they get older and June's adult relatives being concerned about her. The show does not only talk about June, but she is often talked about, worried about, or addressed. she hasn't appeared in-person, however. It has been more a case of everyone reacting to news reports, leaked videos, or trying to find her before a court date. It has taken an odd show and made it all the more surreal. By watching the various shows about Mama June, Honey Boo Boo, and the rest of the family you can see how fame and a decent chunk of money drastically affected this family. Some people turned out okay and weathered the complexities of money and popularity, others crumbled into a hot mess. This zany family had divorce, dramatic lifestyle changes, and now has been dealing with the all-too-real impact of addiction.
"Mama June: From Not to Hot," always lists resources for help with addiction when it airs every Friday on WeTV. It acts like it is trying to be educational. It honestly comes across a bit exploitative, but at the same time has a weird inspirational element in seeming how some members of the family--such as Lauryn/Pumpkin--have stepped-up to lead and help everyone in the face of their Mother's total breakdown. Lauryn is 19 and has her own 2-year-old daughter with her partner, but assumed custody of Alana (Honey Boo Boo) and seems to be working hard to keep the family as a functional unit. It is impressive to see someone so young take on so much.

Then there still is Mike/Sugar Bear (June's Ex-Husband and Alana's assumed Dad) and his new wife Jennifer around for comedic relief and some additional drama. The whole thing is weirdly watchable with its mixture of silly moments and extremely serious ones. It's about as trashy as reality television can get, but that's always been a big guilty pleasure of mine. Hence, I'm gonna keep tuning in as long as the show keeps going--and hopefully, someday the main star (June) will actually get help and get clean.