Now DC is Finishing Some Series as Digital-Only Releases 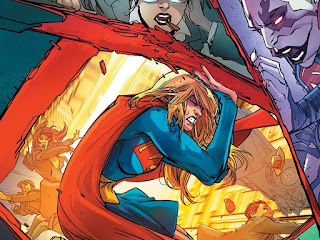 I wrote about how Marvel was going to be closing-out some of their mini-series as digital-only releases. Well, it seems DC decided that would work for them too, but will be doing it with some concluding ongoing titles. "Supergirl," #41 and #42 will only be found digitally as will, "The Terrifics," #28, #29, and #30. I'm glad these books will be able to actually end somewhat on their own terms as opposed to suddenly being cancelled, but man, that must be annoying if you were collecting individual issues.

Now you've got to buy these issues digitally or in trade paperback as while you were able to hold a physical copy of, "The Terrifics," #27, there never shall be an actual floppy of #28. These aren't mini-series with a handful of issues out, either, these are long-running series that DC has clearly decided to just call it quits with. For those of us who like to have a physical comic, I wonder how wary it will make readers in the future. I mean, his could backfire. Imagine if you like a comic but worry it could suddenly go digital-only and then be cancelled. What would keep you from just trade-waiting a number of titles, figuring they'll end-up only in trade for a physical copy anyway? It's a bit of tightrope, and I hope Marvel and DC walk it carefully.
Posted by David Charles Bitterbaum at 7:57 PM