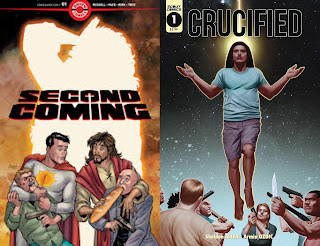 Two comics have come out relatively recently that feature an interpretation of Jesus. One of these comics is satirical and has the literal Jesus, another is more of a crime-thriller and features a person declaring himself, "The Christ," and performing miracles of sorts. They are both pretty good comics with pros and cons and each are published by smaller publishers who don't mind the possible controversy of touching upon religion. The books are, "Second Coming," from Ahoy Comics and, "Crucified," by SCOUT Comics. 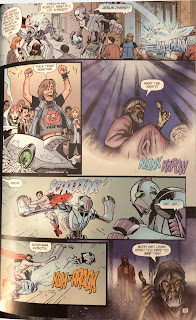 "Second Coming," of course has gotten a good chunk more press, having started its life solicited as a part of a revamped (and now axed) Vertigo-line. DC got nervous when some arch-Conservatives whined about a book that dares question modern-dare Christians and how badly some interpret Jesus' gospel, so they gave the creators (Mark Russell, Richard Pace) the right to go to another publisher. Ahoy comics realized they didn't hate money (lots of press generally = sales) so they gladly let the creator-owned book come join the company. The first issue came out, and it is pretty solid. The general idea is that God is annoyed with how peaceful and laid-back Jesus is, wanting his son to instead dole-out some Old Testament-fashioned Justice to the dwellers of Earth. God notices a popular super-hero who is quite rough-and-tough, Sunstar, and asks him to take Jesus under his wing.

It is a wild concept and the book immediately does a good job showing how even if Sunstar is strong and powerful he isn't some hateful dunce (a sweet scene with he and his wife discussing wanting a child gives him a lot of humanity) and Jesus right away finds himself confused by this Earth he's returned to using the symbol of his death, a cross, as a representation of the religion that is supposed to follow his teachings. There is a lot of ground to cover in the first issue, but it does a solid job and nobody comes across as a caricature. 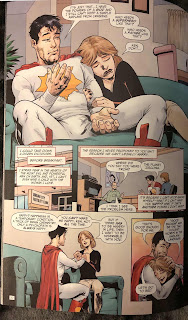 I would not say the book is anti-Christian at all as some people who didn't even read it claimed, it just is unafraid to take Christians to task for actually practicing what they preach. If any character is called-out, it is God himself for his treatment of humanity, growing enraged when it doesn't do exactly as he demands yet giving people free-will. Some of the jokes do fall a bit flat and I'm curious how the overall plot develops as we proceed, but it's a solid start. 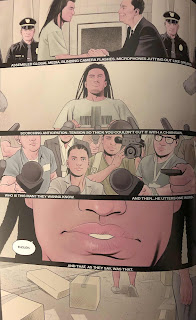 "Crucified," is published by another indie-company I adore, SCOUT Comics, and is as tonally different from, "Second Coming," as could be possible. Done by writer Sheldon Allen and artist Armin Ozdic, it focuses on Los Angeles where a year previously from the book's timeline a huge race-riot had erupted between the Black and Latino population. Mayhem raged for two weeks and when it looked like the more affluent regions populated by White folk (Hollywood, and such) were at risk then the Mayor did a last-ditch effort. He reached-out to a popular speaker whom had been amassing followers thanks to his preaching and apparent ability to heal others known only as, "The Christ." The Christ marched to City Hall, simply said, "Enough," and then the riots just...stopped. Now a year later everyone is reeling from the implications of all this and trying to figure this The Christ guy out. It is a really good hook, but the book gets a little overstuffed with a ton of subplots.

In terms of story-lines fighting for space, we have The Christ's head of security who seems to be a bit crooked, an assassin hired to kill The Christ by people concerned he will bring too much stability and ruin businesses that thrive on mayhem, a reporter trying to get an interview with The Christ, and some other stuff that results in a very busy book that I feel could've benefited from maybe a double-sized debut issue just to really get stuff fleshed-out. Then again, the fact I was so eager to read more is a good thing as well, because the book is great. 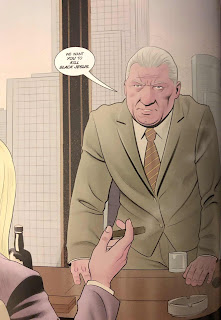 "Crucified," is a bit less about religion as it is more-so about race, politics, and how money can get people to do terrible things. The power of belief clearly plays a role, but with so many plots and subplots happening in the book one character I really would've liked to learn more about, The Christ, is still quite a mystery. I'm curious how all this stories will come together as the book proceeds I am without a doubt eager to see where this goes. 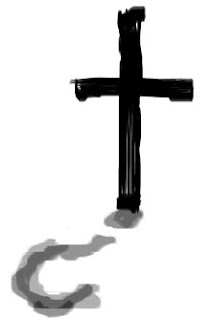 One could ask, "Why bother?" of these comics that engage with Christianity and Jesus from a critical standpoint. After all, those who are super-Conservative and refuse to have any of their beliefs questioned won't read one of these comics, and those who are open to critical discussion will find these books are essentially, "Preaching to the choir." That said, there are plenty of people who may be a little religious (within Christianity or another religion) and find it interesting to see the subject of Jesus and his teachings looked at from a modern-day lens.

Whether it is more satirical with, "Second Coming," where Jesus finds himself upset at how humanity now practices his gospel or, "Crucified," with its intricate look at the way we might respond to a potential second-coming and all the socio-cultural complexities that might bring, both books are very well-done in their examination of Christianity, and it helps they are good reads in general too!
Posted by David Charles Bitterbaum at 11:13 PM