"Knife Crime," by Simon Hanselmann is Twisted and Excellent 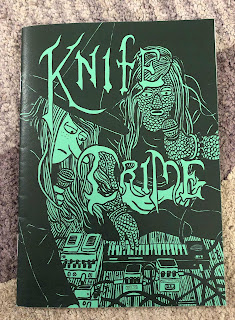 I've written previously about my affection for the works of Simon Hanselmann. He has a big book ("Bad Gateway,") due to be released from publisher Fantagraphics this July 30th, and I'm very excited. Before that book's release however, Hanselmann had another one of his self-published mini-comics come out featuring everyone's favorite terrible people/animals--Megg, Mogg, Werewolf Jones, and Booger (Owl is at work for this issue, it mentions). Titled, "Knife Crime," it is longer-form as opposed to a short-strip, showing Megg and Mogg struggling to get motivated to do anything while the television plays what feels like a never-ending ad for that new, "Trulicity," drug.

As the issue proceeds they get drunk and high at a playground, argue, have group-sex, and otherwise basically just try to stave off the miseries of life with the numbing power of intoxicants and fucking. So yeah, as with a lot of Hanselmann's work it is a mixture of both funny and terribly depressing at the same time. Megg and Moog continue to argue about how doomed their relationship is, and a bit earlier in the book (before the playground-drugs and orgy) is my favorite segment of the book where Megg and Booger get into an argument with Werewolf Jones when he learns they have made their own offshoot band from the group's one, "Horse Mania," titled, "Knife Crime," as per the comic's name. It apparently consists of loops and mumbling about Disney Princesses and Ketamine, or, "Soundcloud Rap," as Moog dismissively describes it. 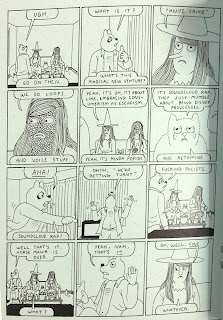 Hanselmann's art continues to be fantastic, imparting a twisted vibe with the weird assortment of animals, animal-human hybrids, witches, and a boogey monster all just hanging-out and trying not to be miserable. A bit cartoony but still grounded in a harsh and sad realism, Hanselmann is one of the best modern talents working today in comics, and you can take that statement to the bank and cash it in for a hit of whatever Werewolf Jones is smoking today. I can't wait for, "Bad Gateway," but this was a great read to get me extra-hyped.
5 out of 5 stars.
Posted by David Charles Bitterbaum at 6:50 PM