Television Tuesday: My One Thought on "The Bachelorette," This Season 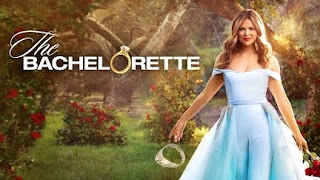 "The Bachelorette," has been on and I've barely watched it as I will admit to not being a huge fan of Hannah B. I don't hate her, but I also lack much of any enthusiasm in watching her as the lead on a season of a "Bachelor"/"Bachelorette" program. That said I do have one thought on the season: I am surprised they found someone even more unlikable than Colton so fast in the form of Jed Wyatt.

Yes, I have often discussed how much I did not care for Colton (just look at many of my posts on the show) due to how outright bland and aggressively dull he is. That season of, "The Bachelor," that led to Hannah's current gig featured him basically shrugging-off at the end some women who were very interested in him for Cassie, who started-out the show seeming sweet but by the end was so wishy-washy about whether she liked Colton or not it infuriated everybody watching. That's nothing compared to Jed Wyatt though, a man who apparently told his girlfriend he was doing, "The Bachelorette," simply to get famous, had sex with her the day before he came on the show, and then supposedly fell in love with Hannah and if leaks are to believed, he was her final choice.
Oh, Jed also apparently cheated on Hannah with a yet another woman in this mix and at this point his rumored engagement to Hannah has been broken-off by her and she's just outright left him. Again, it is all hearsay until the show actually broadcasts its conclusion (everyone on the show has signed NDAs and has to stay mum about the juiciest details for now), but if any of this is true, just damn. With all this happening my one thought continues to be how I'm just amazed it only took a season for someone truly disgusting to get everyone's hate after just how miserable a person Colton was--although to his credit he was never a cheater and liar, just as exciting a watching paint dry. At this point the zany laid-back fun of, "Bachelor in Paradise," can't get here soon enough.
Posted by David Charles Bitterbaum at 11:42 PM