I Flipped Through, "Secret Empire," and Only Like Two Things About It 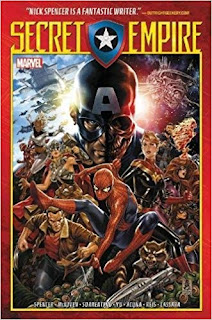 I previously did a, "Tale From the Dollar Bin," discussing an issue of, "Secret Empire," and how terrible I thought it was. Curiosity had me wondering if reading a collection of the whole event might help change my mind even a little, so I checked a copy out from my awesome local library and proceeded to kind-of read it and kind-of aimlessly flip through the book when I found it too atrocious to pay my full attention. There are only two thing I think I like about, "Secret Empire." Let's discuss. 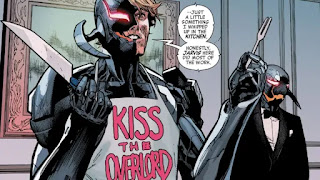 1. It has an utterly insane scene with Hank Pym/Ultron hosting a Thanksgiving-styled dinner to a bunch of trapped Avengers.
Some years ago there was that weird thing where Hank Pym and Ultron merged into a single person (it was called, "Rage of Ultron," and it is pretty forgettable) which then was mostly promptly forgotten about except for his popping-up now and then. In the 4th issue of, "Secret Empire," he entraps both the Nazified Steve Rogers and a bunch of Avengers fighting against him (a robotic Tony Stark who I think was still in a coma from, "Civil War II," and other folk) in a replica of the Avengers mansion and proceeds to cheerily serve them a Thanksgiving-esque dinner.

He proceeds to go on a variety of angry rants about feeling unappreciated before having sudden mood-swings and being happy again. It is just completely bonkers enough that in this terrible event full of awful decisions it is deliciously absurd and actually kinda works. I mean, we've already got a Nazi Captain America and a hologram Tony Stark who apparently is running off of a program that simulates him being drunk, so why not throw-in Pymtron (as the internet calls him) and just have shit get even more crazy? If, "Secret Empire," is a mess, at least this dinner is a delightful moment of embracing the sheer chaos. 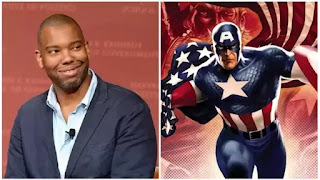 2. Elements of it are drawn-upon in Ta-Nehisi Coates current stellar run on, "Captain America."
When Ta-Nehisi Coates wrote the newest re-launch of, "Captain America," he could have tried to completely ignore the mess that was, "Secret Empire," but instead he leaned-into certain aspects. Coates introduced us to an America that felt confused and betrayed by the idea that someone who looked just like Steve Rogers spouted hate. Coates played-up the fact that a lot of people would wonder if the Captain America who was supposedly back and beat the evil one was a good-guy. With that concept Coates has been doing a stellar job on the book creating a complex mystery full of conspiracy and deceit.

In a world where even the symbol of all that is supposedly good--Captain America--could be used for evil who can the people of America trust? Coates has dived deep into this concept and the way he has taken a God-awful event and seen the potential in it to create a masterful story is as impressive as it is wonderful to read. If we had to go through, "Secret Empire," to get to Coates run on, "Captain America," I guess it was worth it.
Posted by David Charles Bitterbaum at 9:30 PM