I read three books by popular comic-creator Simon Hanselmann, pictured above. He is best known for his work involving a witch, cat, and owl named (respectively), Megg, Mogg, and Owl. Megg and Mogg are a couple who spend most of their time dealing with anxiety and depression through large amounts of drug use whilst Owl struggles to pay most of the rent, hold down a job, and sometimes do drugs too when he's not off making questionable romantic choices (he has many STI's from not using protection). They have some friends, such as Booger, a former Boogeyman who transitioned to being a female, Mike, who kind of looks like a garden gnome, and utterly reckless Werewolf Jones, whom I'll discuss more in a bit. The comics with these characters don't have an overarching plot at first glance, although some general stories begin to form over time. Often it is just weird little segments that can be hilarious, depressing, or both.

I read three collections, "Megahex," Megg and Mogg in Amsterdam and Other Stories," and the latest 2017 book, "One More Year." The characters will often appear in a variety of comics, magazines, websites, and such so having these books to collect much of their adventures is wonderful and saves me time tracking-down a variety of publications/webpages. When reading the comics it is clear that Megg and Mogg are not bad people per se, they just are horrifically flawed, need help dealing with their issues (both personal and relationship-based) and have a codependency with Owl who honestly enables a lot of their worst behavior. Then there's Werewolf Jones. 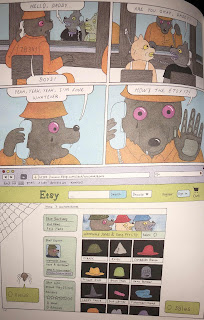 Now, Werewolf Jones, he's just chaos in a humanoid form. As addicted to drugs and mayhem as he is attention-seeking, WWJ will run a cheese grater on his genitals, crash a car into a Target to steal baby-seats to sell, and take all the drugs available just because he can. He has two middle-schooler sons who are always jacked-up on sugar, leftover drugs, or a mixture of both. He's a supporting character so as to not wear out his welcome in the book, but man is he wild with his insane schemes--such as selling fabric hats on Etsy and at a trade show, but then getting stopped by airport security, stripping naked in front of everyone, and declaring they can search him before he passes out from all his drugs and ends up in prison, asking his son's about the Etsy store.

The assorted adventures of Megg, Mogg, Owl, and everyone else may sound like mostly idiotic stoner comedy, and that is an element, but there is some sharp and incisive commentary running through the book. Owl tries to act like a stand-up citizen and better than everyone else, but has a lot of his own vices and is so obsessed with status-climbing at a miserable telemarketing job he struggles at realizing just how deeply unhappy he is. Plus, throughout the books we see the sadness as Megg and Mogg come to terms with how their relationship is one of distrust and anger with them only getting along when deeply intoxicated. Plus, gender issues are discussed with Booger and how people treat her as a transgender Boogeyman/Boogeywoman. Oh, and we never see Megg's mother or hear/read her voice, but the times she is discussed it is made clear Megg's relationship with her mother is really damaged and miserable. Oh, and the flashback in, "One More Year," to everyone in high school is mostly heartbreaking. Basically, a whole lot of sadness and drama lurks just beneath the surface of some great humor--and don't get me wrong, despite the misery these books are hilarious and made me literally laugh at loud.
Some of the comics/mini-comics and magazines that have featured Megg, Mogg, and Owl are long since sold-out or out-of-print. However, thanks to Fantagraphics having these three big collections it is easy to take-in Hanselmann's genius. Between his stellar illustrative skills, masterful storytelling, and keen sense of humor these were all amazing comics. I look forward to the upcoming book Hanselmann has discussed, "Megg's Coven," for sure and any other work he puts out!
5 out of 5 stars (for all three books).
Posted by David Charles Bitterbaum at 3:08 PM