"The Fang," is Pulpy Goodness 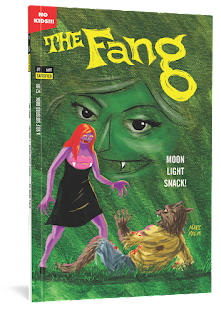 I was at one of the local comic-shops I enjoy browsing and spotted on the shelves with newer releases what looked like a fun little book, sized like the pulp stories of old. It was titled, "The Fang," and upon my skimming through it I was impressed and bought it! Having now read the entire comic I can say it is good fun thanks to its mixture of supernatural violence, eroticism, and humor. I'm quite glad I picked it up!

Written and illustrated by Marc Palm, "The Fang," is focused on its titular character, a vampire who also is an assasin-for-hire who kills other monsters in exchange for a big payday. The book follows her as she almost kills a werwolf, but hesitates because they have some romantic chemistry and agree to meet-up again later. Then we witness her burn-up a slime monster, get high with her friend the Hash Hag, and later hook-up with the werewolf via some saucy, "Mouth-stuff," as folk call it these days...before shooting him with some silver bullets because she may have thought he was cute, but she's still a professional! Also, there is an extra chapter about her fighting a Dr. Jekyll-type person that turns from a man into a huge monster baby. It is all good fun and boosted by Palm's stellar artwork. 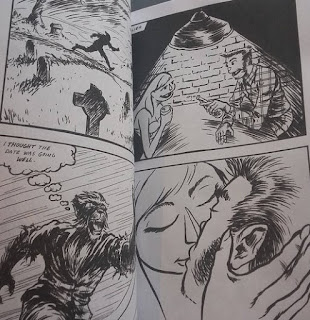 Marc Palm's art-style reminds me a bit of Colleen Coover's thanks to its light and fun appearance, meshed with the more stark shapes and minimalism of Mike Allred. It has just the right mixture of cute and sexy when needed and gross and rough when a scene calls for it too. This results in The Fang and her Wolfman-date's scenes looking quite sexy whilst Palm also excels as showing a slime monster melt into sludge. It is fantastic stuff.

Marc Palm can be found at his Tumblr and also maintains a Patreon for those interested in following his work. If you want to purchase a copy of, "The Fang," he actually sells it in his own Etsy store, and it was recently picked-up for wider distribution via Fantagraphics, which is how I imagine it ended-up in the comic-shop where it caught my eye. I am so happy to have stumbled upon this book and eagerly give it 5 out of 5 stars.
Posted by David Charles Bitterbaum at 10:42 PM