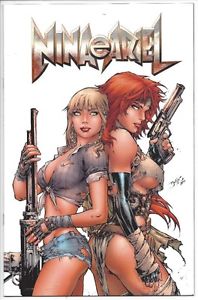 Back some years ago, on a day I felt particularly salty and cranky, I made a post where I called Ed Benes a hack. Some time later I took a long hard look at his work and myself, and realized the dude had talent and was not a hack, but a creator I enjoyed, as I discussed in another post. After all, there are lots of creators whose work just makes me recoil in disgust (hey there, Greg Land), but Benes ain't bad at all. Hence, in my effort towards self-atonement so I feel like I'm not a mean person, I want to share with folk how I noticed Ed Benes is doing a neat new Kickstarter campaign for a comic-book.

Titled, "Nina and Ariel," it is the first issue of, "A post-apocalyptic sci-fi series inspired by Ed's love of Heavy Metal Magazine and similar European comics of the time, and also the work of Frank Frazetta (Fire & Ice, etc)." Also, it puts fears of long delays to rest, assuring backers, "All of the work is done...book has been scripted, drawn, lettered, and colored.  Now all we need is to send it off to the printer!  The Kickstarter campaign is going to help us cover all print costs, and will also allow us to pay the creators, and to get issue 2 into production as soon as possible!" Benes is the writer and artist with some other folk on coloring, lettering, etc. It looks fun and for just $4 you can get a PDF or pay a smidgen more for a physical copy, up to big bucks for all kinds of variant covers and goodies. It looks like a legitimately fun comic with some sharp illustrations (Benes ain't phoning it in on this labor of love) and as someone who loves sci-fi it has my attention. 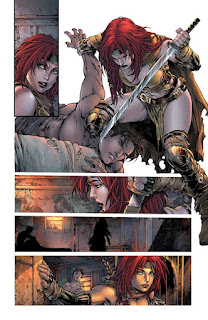 I'm not proud of when I was needlessly mean to Benes, but think that since my initial apology-post and now telling folk about the comic I hopefully have made it up to guy. Plus, I of course backed the campaign so that I can get a copy of my own to read and enjoy. I would encourage you to do so as well by following this link.
Posted by David Charles Bitterbaum at 1:12 PM