Okay, so Vertigo IS Dead and the Black Label is NOT?

Excuse me if I'm late reporting some of this assortment of news and rumors, I'm on a vacation of sorts (visiting family and friends in Cortland) and only can handle so much confusion between sorting-through my old books and CDs here in-between eating at my favorite local food establishments. Anyway, I'm confused because it seems like every other week we hear that DC has killed their Vertigo imprint, revitalized it, and then might be axing it yet again. Now the same damn thing is happening with the Black Label. When Bruce Wayne's Bat-penis was exposed in a Black Label comic the whole line seemed to be getting quietly killed-off, now it is announcing new books.

One soon-to-debut title is, "Joker/Harley: Criminal Sanity," comic featuring an out-of-continuity tale where over nine-issues we follow a young Harley Quinn, who works as a forensic psychiatrist and consulting profiler for the Gotham City Police Department. She is working at hunting-down a vicious serial killer, who will of course be the Joker. It sounds fine, but I feel like anything with the Black Label lately that has come out or been announced relates to Batman and his foes. Whatever happened to the Wonder Woman ones they talked about when the line first was discussed? Meanwhile, DC might be shutting-down the Vertigo line since the most recent re-launch in 2018 has basically all but died other than the stellar, "American Carnage," comic which is only set to go for nine issues, as writer Bryan Edward Hill told me in our interview. 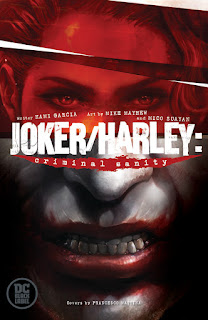 I'm not exactly sure what is going on with Vertigo and the Black Label, but I can only hope that everything gets sorted out and the end result is quality stories. I mean, these aren't even the only imprints with DC making me befuddled, remember the death and return of Young Animal? Yeah, I need to go lie down now before I get dizzy.
Posted by David Charles Bitterbaum at 7:24 PM