"Doomsday Clock," #10 Reminded Me of Another Random Comic 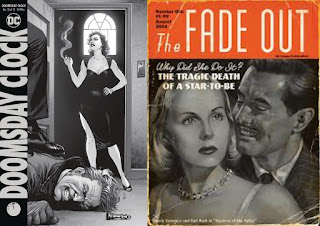 "Doomsday Clock," is the 12-issue max-series from DC that has much to the surprise of myself and others been really, really good. It has also been horrendously delayed for assorted reasons, but it keeps slowly coming out on a vaguely quarterly schedule now. Geoff Johns is writing it and Gary Frank is providing the illustrations. It has been extremely clever and utilized characters from the comic, "Watchmen," in the only way I thought would work--getting really meta and 4th-wall-bending. Much has been written about how the latest issue is in a way Geoff Johns making his own clever comments on working for DC in comics and film as well as changing concepts of DC's multiverse in fascinating ways (now the, "Metaverse,") and clever in the way it shows the comic-World is so pliable in time and space with Superman as its intriguing center-part. One thing I haven't seen though, is anyone commenting on how darn much certain elements are reminiscent of another great comic.

If I were to ask someone to name their favorite comic done by two creators who collaborate often named Ed Brubaker and Sean Phillips, the odds are good that person would say, "Criminal." If they like the duo's older stuff, "Sleeper," might get thrown-out. Most would maybe forget what I feel is actually their greatest work, "The Fade Out." The comic is about the dark and seedy underbelly of Hollywood in 1948. It follows an assortment of studio-heads, actors, screenwriters, and such as the industry works to keep a whole bunch of secrets kept quiet (e.g. how many people were in the closet, had substance abuse issues, and so forth). It was only 12 issues (the debut was extra-long), but a fantastic dozen for sure. I found myself really getting some of its vibe in certain aspects of the tenth issue of, "Doomsday Clock." 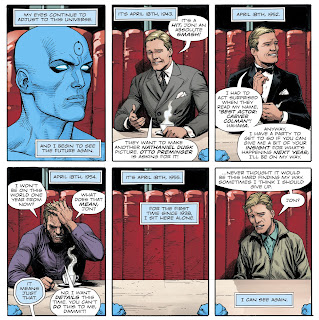 This latest issue of, "Doomsday Clock," shows where Doctor Manhattan of the famous, "Watchmen," comic went after he left that Universe. He went to the one with Superman and noticed the strange way time seemed to alter and bend around the character. Manhattan doesn't meet Superman first, however. No, he meets a young man named Carver Coleman who has gone to Hollywood hoping to become a big star but is struggling in an unforgiving and difficult industry. Manhattan ends up having Carver be a bit of a focal point for him to practice his powers to, "See," around in time and much of the comic when it isn't following Doctor Manhattan involves Carver and his immense success as an actor in the, "Nathaniel Dusk," film series.

"Nathaniel Dusk," was an actual detective-comic published by DC at points in time and, "Doomsday Clock," has had the films serve as a bit of a background-material in much of the issues, not unlike how, "Watchmen," incorporated that Black Freighter comic within the text. A lot of the comic-moments with Carver and his putting-up with the sleazy side of Hollywood made me strongly think of, "The Fade Out," albeit now with DC super-heroes and Doctor Manhattan thrown-in to tweak stuff. 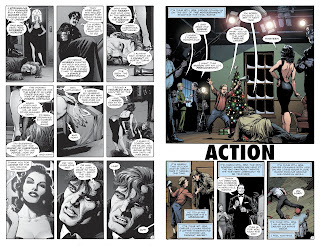 "Doomsday Clock," has two more issues to go of its dozen and seems as if it is going to make some big changes to the DC Universe while also cleverly contextualizing the rules of it Universe. "Watchmen," was also 12 issues and altered the landscape of the comic-book form forever. "The Fade Out," was of course 12 great issues and is in my opinion unfairly ignored by many when the best works of Brubaker and Phillips are discussed. Dozens all around, linked in various ways be it the comics directly riffing on each other or tonally reminding me of certain elements in the others.

I know Johns and Frank weren't drawing from anything in, "The Fade Out," with this tenth issue of, "Doomsday Clock," but it just felt nice to see an unintended and inadvertent spiritual sequel to, "The Fade Out," popping up in issue #10 of, "Doomsday Clock," of all places when it came to certain parts of the story and its vibe when it came to late-40's (and some of 1950's) Hollywood. Again, I'm about 99.9% sure I'm the only person to see much similarities between the books, but it makes me all warm and fuzzy to think I did even if I maybe look a bit like a crazed-maniac drawing random comparisons between totally unrelated books.
Posted by David Charles Bitterbaum at 11:49 PM