Random Statement: Jughead is my Favorite, "Archie," Character as this Article About Him Reminded Me 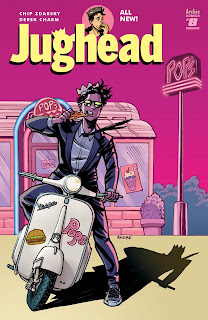 I just wanted to share the random thought that Jughead is my favorite, "Archie," character. I was reminded of this today reading a piece on Comicsbeat discussing how Jughead is arguably the most well-known Asexual character in comic-books. His Asexuality is not why I am a big fan of him, but I was pleased when it was made explicitly clear he is Asexual. We have characters like Archie who is always dealing with his usual cliché drama of whether he wants to be with Betty or Veronica, and a variety of other straight characters, plus some gay-representation by Kevin Keller, who also is a wonderful person thankfully not wholly defined by who he is attracted to.

It makes sense for Jughead to be clearly made Asexual however as he (almost) never in his comics expressed sexual interest in anyone. Asexuality is of course a complex subject with a variety of intricate elements (Asexual does not mean Aromantic for example), but it just makes perfect sense for Jughead. When you think about him you consider how he's a chill dude who loves hamburgers and hanging-out. He is probably one of the better-fleshed out Archie characters because he is not defined by his romances. A big element of Archie, Betty, and Veronica of course is the romantic drama. Jughead however is defined by himself and what makes him cool separate of whom he is wanting to make-out with.
Jughead is someone I'd like to be friends with. He is clever, funny, is a foodie (although with my beef allergy I can't eat burgers), and otherwise is a relaxed and cool guy. His Asexuality is another interesting thing about him, but not the main interesting thing. Even if some versions of the character don't have him as Asexual he is still always a cool dude overall.
Posted by David Charles Bitterbaum at 1:57 PM