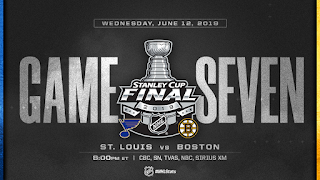 On Sunday I made a post discussing my hopes for the Saint Louis Blues to win the Stanley Cup in Game 6. The game did not go especially well, with the final score being 5-1...in Boston's favor. This brings us to Game 7, the final game, today. It is taking place in Boston, but the Blues won Game 5 despite it being on the Bruin's turf, so here's hoping that today the Blues will win and achieve their first-ever victory in successfully completing the road to the Stanley Cup.
Posted by David Charles Bitterbaum at 7:41 AM